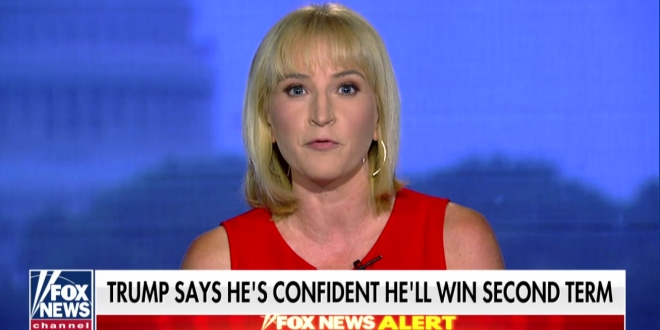 Republican National Committee spokeswoman Liz Harrington compared 2020 Democratic presidential candidates to murderous fascist dictator Benito Mussolini, and Fox News hard news anchor Harris Faulkner partially agreed with the assessment. On Wednesday’s edition of Fox News’ Outnumbered Overtime With Harris Faulkner, Harrington told Faulkner that voters are “going to be faced with a choice in 2020, and the president is exactly right. He said there are no Winston Churchills.”

“But you know, I do see quite a few Benito Mussolinis in the Democratic field,” Harrington added, to an audible “Ooh!” from Faulkner. “And now it’s about running, getting the trains to run on time in Hawaii because they’re talking about banning airplanes in 10 years,” Harrington continued, making the first of many claims in the segment that have been rated “false” by Politifact.

As you can see, she’s proud of the comparison.

.@realDonaldTrump is exactly right: the Democrats don’t have any Winston Churchills in their field

But I do see some Benito Mussolinis

Only now Democrats are trying to get the trains to run on time to Hawaii, because they want to ban air travel in 10 years pic.twitter.com/r62pmajWKc

Previous REPORT: Soldiers Charged In Death Of Green Beret Planned To Record Him Being Raped To Shame Him
Next Catholic Bishop Ousted For Sexual Abuse Spent Millions On Luxury Travel, Lavished Cash Gifts On Young Priests