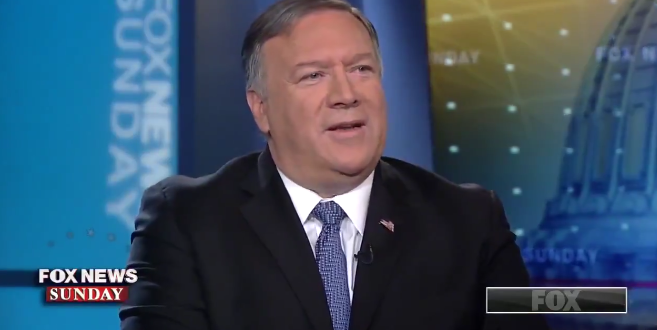 Pompeo Gets Snippy When Asked About Foreign Dirt: Stop Asking About This “Washington Piece Of Silliness”

“Chris, you know you asked me not to call any of your questions today ‘ridiculous,’ you came really close right there. President Trump has been very clear. He clarified his remarks later, he made it very clear, even in his first comments, he said, ‘I’d do both.’ He said he’d call the FBI. I have nothing further to add.

“I came on to talk about foreign policy, and I think the third time you’ve asked me about a Washington piece of silliness that chased down a story that is inconsistent with what I have seen President Trump do every single day.” – Mike Pompeo, after Fox host Chris Wallace repeatedly pressed him on foreign dirt.

On Fox News Sunday, Mike Pompeo nearly blows a gasket when Chris Wallace asks him very straightforward questions regarding Trump’s comments about how he wouldn’t contact the FBI if he’s offered dirt on a 2020 opponent by a foreign government. pic.twitter.com/HgpyFDgBG5

Pompeo gets genuinely angry when reminded he works for a disloyal, anti-American know-nothing .. That of course makes him an enabler https://t.co/B4rd4WnwrP

People with stars ⭐️ in their handles on my timeline musing that Chris wallace is a liberal because he asked Pompeo a non-propaganda question. pic.twitter.com/fVl9cNEezO

Pompeo is upset Chris Wallace asked him about Trump’s willingness to take political dirt from a foreign government, calls it “a Washington piece of silliness.” @FoxNewsSunday