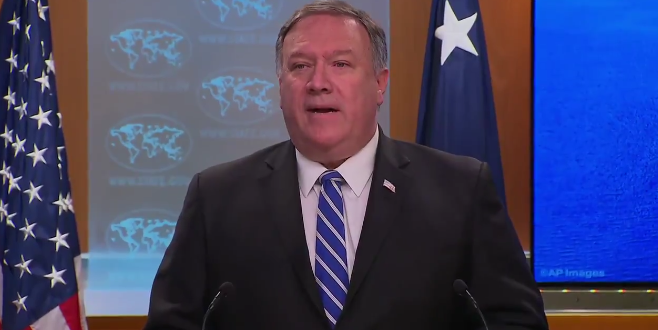 Secretary of State Mike Pompeo said Thursday that intelligence reviewed by American officials showed that Iran was responsible for attacks on two oil tankers in the Gulf of Oman, a critical waterway for the transit of much of the world’s petroleum. Mr. Pompeo did not present any evidence of Iran’s involvement when announcing the findings.

The assertion is certain to fuel tensions between the Trump administration and Iranian leaders that have increased since early May, when the White House announced military movements in response to what American officials have said is a heightened threat from Iran.

Mr. Pompeo said the sabotage against the two tankers was only the latest in a series of recent violent acts by Iran. “Taken as a whole, these unprovoked attacks present a clear threat to international peace and security,” he said.

JUST IN: Sec. of State Mike Pompeo: “It is the assessment of the United States government that the Islamic Republic of Iran is responsible for the attacks that occurred in the Gulf of Oman today.” https://t.co/up8fb7V91z pic.twitter.com/nrFAFYhB7i

It is the assessment of the U.S. government that Iran is responsible for today’s attacks in the Gulf of Oman. These attacks are a threat to international peace and security, a blatant assault on the freedom of navigation, and an unacceptable escalation of tension by Iran. pic.twitter.com/cbLrWNU5S0

Mike Pompeo says the U.S. believes Iran was directly responsible for oil tanker blasts in the Gulf of Oman and it couldn’t have been any proxies.

Javad Zarif asks why Iran would attack a Japanese tanker when Japan’s prime minister is visiting.

Pompeo says Iran is “lashing out” because it wants the U.S. to lift its maximum pressure campaign, adding “no economic sanctions entitle Iran to engage in nuclear blackmail” pic.twitter.com/aQh1n9j2qT

Previous Howard Schultz Cuts Staff, Puts Campaign On Hiatus
Next Trump On Harris’s Promise To Prosecute Him If Elected: “Who Wouldn’t” Say That? I’d Probably Say The Same