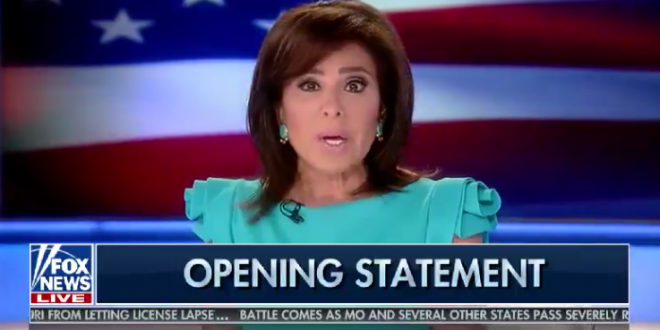 “You either indict or you don’t. Every prosecutor knows if you don’t indict someone, you stop there. What about collusion between Mueller and the Democrats? The Democrats don’t have an independent thought other than their hatred of Donald Trump. They need Mueller to shake things up so they can rally the troops around impeachment. You could have reached a conclusion without charge by simply stating your conclusion or opinion.

“And by the way, when did you know there was no collusion? Did you know that before the midterms? You could have shut the whole thing down. Mueller was charged with serving the United States of America and not his ego, yet that is exactly how he will now be remembered. Nothing has changed in the report. The only thing that has changed is Mueller deciding to create chaos and havoc.” – Jeanine Pirro, last night.

I guess we now have a competition between holier than thou Cardinal Comey and mixed up Monsignor Mueller both members of the choir of never Trumpers in church of demon-rats because that’s what this is all about. Nothing more, nothing less. #OpeningStatement pic.twitter.com/Wn2fQq16px