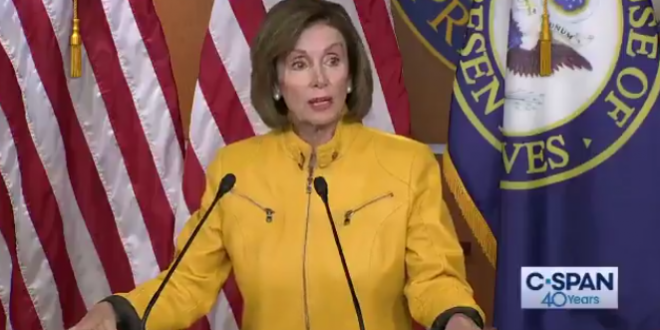 “Everybody in the country should be totally appalled by what the president said last night. Should be totally appalled. He has a habit of making appalling statements. This one borders on so totally unethical but he doesn’t even realize it. However, what we want to do is have a methodical approach to the path we’re on and this will be included in that. But not any one issue is going to trigger, oh now we’re going to go do this.” – House Speaker Nancy Pelosi, on Trump accepting dirt from foreign spies.

Nancy Pelosi: “Yesterday, the president gave us, once again, evidence that he does not know right from wrong. It’s a very sad thing.”
Via CSPAN pic.twitter.com/9N147ha3sC

JUST IN: House Speaker Nancy Pelosi says the House will take up legislation to mandate candidates report to the federal law enforcement any effort by foreign officials to intervene in U.S. elections.

“We have a President who is ignoring the law, not honoring his oath of office. Not honoring the office that he holds,” House Speaker Nancy Pelosi says of President Trump https://t.co/ZiX2EoeSBd pic.twitter.com/DFX7NB7WJf

Previous House Panel Subpoenas Michael Flynn And Rick Gates
Next Office Of Special Counsel: Kellyanne Conway Should Be Fired For Her Repeated Violations Of The Hatch Act