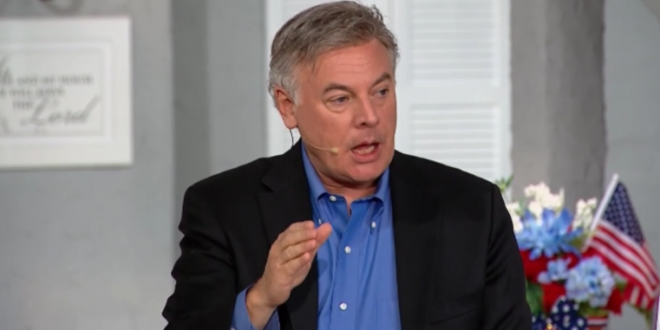 “I think America is in a Jezebel witchcraft. There is a witchcraft veil over the minds and perception of the masses, perpetuated by the false prophecies coming through the media mountain. So there’s your prophets of Baal and they are speaking constantly lies.

“I think God raised you up to apostolically and prophetically break through—in the media realm—that veil. The false prophets are in the media and God has put a burden on you to be courageous. You have a sense of the future as very few people have and you’re a media titan yourself in the spirit realm. I think God has raised you up for us to be able to pierce the veil off of the minds of our people.

“The Latino and Hispanic community, if they are told the president is a racist by media, then it’s poisoning the well. This is what the devil does. The media will try to poison you about this man and if you don’t know him and you just believe that, it poisons the mind. So we’re taking the poison out. We’re literally healing culture.” – End Times nutbag Pastor Lance Wallnau, on the Jim Bakker show.