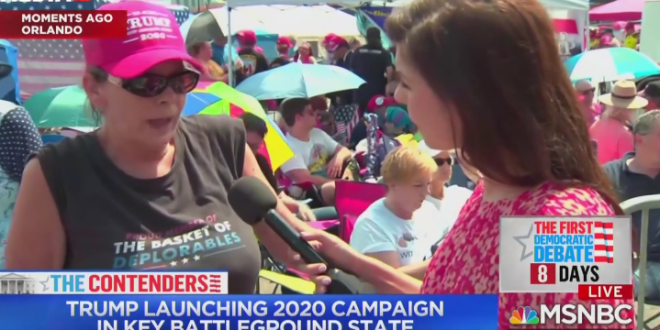 NBC News political reporter Monica Alba interviewed a Trump supporter who said she would be voting for President Donald Trump in 2020 because “He doesn’t lie.”

“What’s the main reason you’ll vote for him again?” Alba asked. The woman replied that Trump is “one of the best presidents that we’ve had for a very long time,” and then said, “He doesn’t lie.”

After a pause so the actual universe could spit its drink, the woman added, “I know y’all say he does, he doesn’t.”

People outside Amway Center are starting to chant “Let us in! Let us in!” as a major downpour hits the area and the #45Fest is officially paused for an “Inclement Weather Announcement.” Storms expected throughout afternoon. Trump rally is not for 6+ hours. pic.twitter.com/685iM7wmGE

Skies open up at #45Fest in Orlando where thousands of Trump supporters are lined up and waiting for tonight’s rally pic.twitter.com/lhQKuKyEzX

These are some supporters of Trump. When you are ignorant and dumb then the president seems smart. Wtf is this lady smoking to say that he doesn’t lie? This is what stupity and denial looks like. pic.twitter.com/oBfvf7stz7