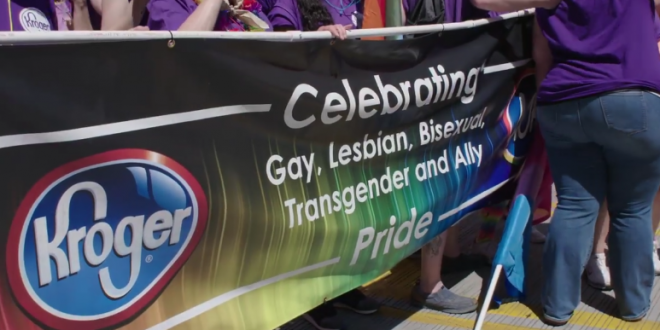 One Million Moms Vs Kroger Supermarkets

“This is a very proud moment for Kroger. We have worked to create a more inclusive work environment where every associate can be their best self every day and this recognition reinforces our commitment,” said Tim Massa, Kroger’s senior vice president of human resources and chief people officer.

Not only is Kroger no longer remaining neutral, but the company is also attempting to play both sides. In their most recent issue of My Magazine, Kroger’s coupon book with recipes for their best customers, the company included a short article on the inside front cover next to the editor’s letter titled, Celebrating Pride Month, since June is Gay Pride month.

It reads: “Diversity and inclusion are part of our core values. We are honored to be recognized for our emphasis on diversity, ranking among the top U.S. corporations when it comes to inclusion. During the month of June, we’re also sponsoring dozens of events and parades across the country.”

After signing the petition, 1MM supporters can also call local Kroger Store Managers and ask a few important questions: Pride for what exactly are you celebrating? What kind of events and parades are Kroger sponsoring? Take Action: Please sign our petition stating you will not shop at Kroger as long as the company celebrates gay pride.

Per Wikipedia, with $121 billion in annual sales, Kroger is the nation’s largest supermarket chain and the second-largest physical retailer behind Walmart. Kroger is ranked #17 on the Forbes 500. 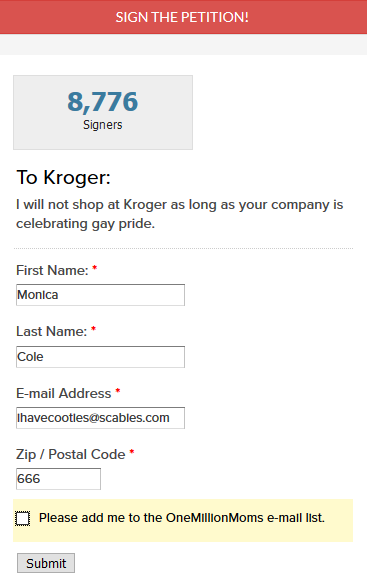 Previous POLL: 77% Say SCOTUS Should Uphold Roe v Wade
Next LONDON: Lesbian Couple Bloodied By Gang Of Men On City Bus After Refusing To Kiss For Their Amusement