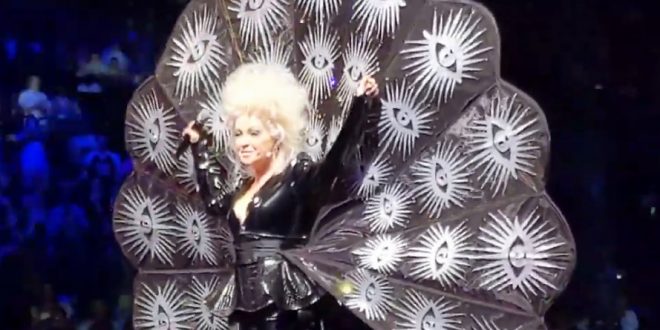 Last night I attended the opening ceremonies for WorldPride/Stonewall 50 at Brooklyn’s Barclays Center where NYC Pride dazzled the packed arena with a slick production that was by turns moving, inspiring, and just plain fabulous.

Whoopi Goldberg was the host of the evening, delivering an uplifting speech that set up the evening’s celebratory atmosphere while marking the 50th anniversary of the Stonewall Riots, a protest against police by patrons of a gay bar in 1969 that is considered the start of the LGBTQ rights movement.

Although the Democratic presidential debate were happening at the same time, politics didn’t take center stage during the World Pride event. In fact, there was only one mention of Pres. Donald Trump, which occurred about two hours into the show when Aaron C. Morris, executive director of the LGBTQ immigrant legal advocacy group Immigration Equality, spoke about the organization’s work.

“We must demand that the United States continues to be a nation that accepts refugees form every part of the world,” he said. “We must ensure that every person who is HIV-positive or an LGBTQ person feels safe to live in the Unites States. It is my truly held belief that the more queer people that come to this nation, the better all of us are. Because of you, we will staff an army of attorneys to sue the SHIT out of the Trump administration.”

I wouldn’t say that politics weren’t “front and center” as there were multiple presentations about the history of LGBT activism, LGBTQ rights, coming out, and much more.

The evening’s three beneficiaries were Immigration Equality, SAGE, and the Ali Forney Center, with AFC founder Carl Siciliano delivering one of his trademark rousing speeches.

Below I’ve collected some highlights of the performances and speeches. I was particularly impressed by NYC Council Speaker Corey Johnson, who credited his being alive as an HIV+ man to ACT UP activists including Peter Staley, Larry Kramer, and Ann Northrop. Johnson may just be our next mayor, by the way.

The head of Immigration Equality just got a HUGE standing ovation when he said: “we will staff an army of lawyers to sue the SHIT out of the Trump administration.” #WorldPride pic.twitter.com/oribukSjPc

This was absolutely AMAZING. Well done, @NYCPride. What an amazing feeling being here on the 50th anniversary of Stonewall.@carlyraejepsen #WorldPride pic.twitter.com/cZnMH9Rmc6

This week NYC is the proud host of #WorldPride 2019.

We celebrate the progress we’ve made since Stonewall, rededicate ourselves to the fight for equality, and pay homage to the brave activists who came before us.

As an HIV+ man I know I wouldn’t be alive today without them. pic.twitter.com/DNlWURhU22

The year is 2019 and @ChakaKhan can STILL deliver Live Vocals #WorldPride pic.twitter.com/CdOHa0q6SC