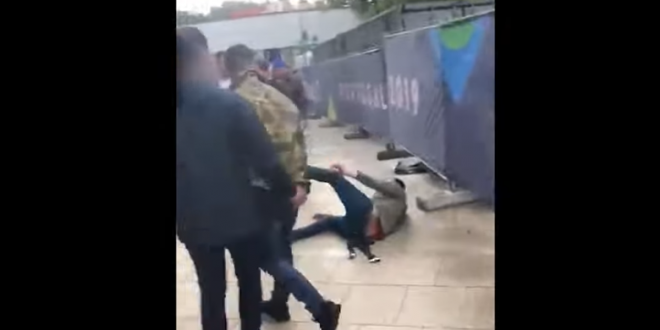 The anti-Islam activist Tommy Robinson has been filmed punching an England fan to the ground outside a football stadium in Portugal. Robinson, whose real name is Stephen Yaxley-Lennon, can be seen walking purposefully toward the man before striking him in the head.

Footage shows the man falling to the floor as Robinson shouts: “Fuck about again you’ll get knocked out again, bruv.” The incident took place little more than a week after the English Defence League founder’s humiliating defeat in the European elections.

In a message to his supporters on Friday, Robinson showed no remorse. He said he had been defending himself and was “fed up of being a punchbag for people.” Robinson has at least five convictions for violence and public order offences.

An England football fan sucker-punched by Tommy Robinson says that moments before being hit he told the far-right extremist “you don’t represent me”. The charity worker, 35, was struck in the head by English Defence League founder Robinson, 36, and it sent him sprawling to the ground.

A video shows convicted football thug Robinson thumping the supporter in Portugal before England’s defeat to the Netherlands in the Nations League semi-final.

The shaken fan said: “I was walking away from Tommy when he made a beeline for me and punched me from behind, in the side of the head. “I’m not the fighting kind and it seemed such cowardly behaviour.”

The day before the Nations League semi-final, which England lost 3-1, Robinson posted another video online in which he winked at the camera and said: “I’m in Portugal, going [to] the game. No football banning order here, mate.”

Wearing the same camouflage jacket, he also complained that the media had linked him to football violence in Portugal, where English fans clashed with police on Wednesday.

Robinson stood unsuccessfully as a candidate in northwest England in last month’s European elections. He faces contempt of court proceedings later this year over the filming of people involved in a criminal trial at Leeds Crown Court.

Robinson is a cult hero among the US far-right and has appeared on Tucker Carlson’s show to promote his white nationalist beliefs. He has been permanently banned from Twitter, Facebook, Instagram, and Snapchat. Earlier this year he was banned from Australia. In 2018 the Trump administration lobbied Britain for Robinson’s release after he was jailed for disrupting a trial.

‘Tommy Robinson’ has gone back to what he knows after his failed entry into politics. He here he is punching another fan to the ground at the UEFA Nations League in Portugal. pic.twitter.com/voY9odr8Is

Portuguese police probing whether they can ban Tommy Robinson from next Nations League England match after video of him punching another fan last night. England team and fans excelling themselves so far. 🏴󠁧󠁢󠁥󠁮󠁧󠁿🇵🇹⚽️🍺#NationsLeague #England #football https://t.co/DavnthUnio