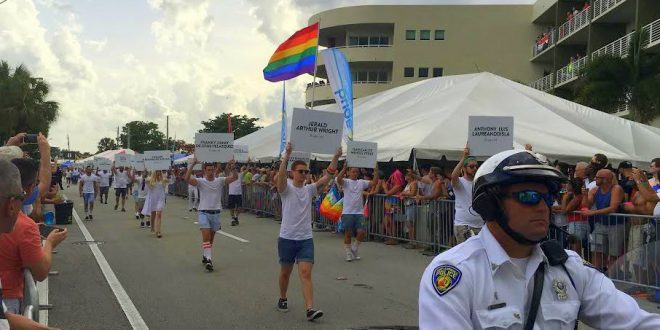 Gentle readers, on today’s third anniversary of the Pulse massacre, I’m rerunning my account of that day. The story below originally ran on Pride Life’s website on July 12th 2016 and makes its first appearance on JMG today.

One month ago today, Sunday June 12th, around 8AM I began my day, as usual, by examining my phone. I usually sleep with the ringer off so I hadn’t heard the many calls that had poured in while I slept.

First I returned my mother’s call from Orlando, my hometown. Without saying hello, she blurted, “Did you see what happened at Pulse? Have you talked to Thomas? I can’t get him on the phone and he hasn’t said anything on Facebook!” As she spoke, I turned on CNN to see the headline, “Dozens Massacred At Orlando Gay Nightclub.”

Thomas is my oldest friend. We met at Orlando’s Parliament House in 1982 while we were students at UCF. He and my mother are longtime friends and she always invites him for Christmas dinner with our family. They also both live quite close to Pulse.

Finally, after an agonizing ten minutes, he answered, also without saying hello. “Baby, I’m OK.” We spoke for two minutes as his call waiting tone beeped incessantly. I let him go to respond to other calls surely as frantic as mine had been and called my mother again.

She picked up on the first ring. “Did you find him? Was he there?”

I said, “Good news. He didn’t even go out last night.”

As I said that, I felt a strange twinge of survivor’s guilty by proxy. Our dear friend was safe, but it felt wrong to use the words “good news” in any context.

My mother audibly exhaled. “Well, I wasn’t too worried. They said last night was Latin night. Plus, you know, Pulse gets such a young crowd.”

Actually, I didn’t know that, but my mother’s knowledge of Orlando’s bar scene, gleaned from friends and the local media, often surprises me.

After returning a few more calls from friends, I moved to my computer to find about two hundred horrified emails and Facebook messages from JMG readers, most of whom knew I’m from Orlando. I dashed off a blanket note of thanks on my social media accounts and began what would be an 16-hour day of the most gruesome blogging I’ve ever done.

You see, for some reason I still tend to see Orlando frozen in amber as the small town it was when my family moved there in 1971. A terror attack on that Orlando didn’t make sense. I still tend to see it as the town where kids would race to the Jordan Marsh at the far end of Colonial Mall because it had escalators. Escalators! In a department store! What would ISIS care about that Orlando? Heck, when I first came out, my friends would often just tell each other, “See you tonight at the bar.” THE bar. No name needed. The Parliament House was the bar.

Of course, thanks to a shrewd real estate purchase made by a movie mogul several years before my family arrived, that Orlando is long, long gone. The new Orlando, I kept reminding myself one month ago today, is a sprawling multi-county metropolis with millions of residents and more hotel rooms than New York City. My formerly tiny alma mater, where I once traveled down an ill-paved two-lane road to park in dirt between the pine trees, now boasts the highest enrollment of any public university in the nation.

The new Orlando, the real Orlando, the relentlessly booming Orlando not of my adolescence, the Orlando where people from all over the world enjoy the most American-style vacations one can imagine, that Orlando, I told myself one month ago today, made sick “sense” as a terror target. That thought made it feel oddly less personal somehow. Even though the victims were my people, even though they could have easily been me, been my friends. I realize that sort of bizarre coping mechanism may not make much sense.

But then in midday, not long after I put up those emotional deflector shields, we all learned that the killer was a local man.

So maybe this wasn’t organized by ISIS. Maybe this wasn’t an attack on the new Orlando, the Orlando that sells the American way in a hundred languages on billboards and buses all over the world. And so I circled back to my Orlando, the Orlando targeted not for its inherent Orlando-ness, but simply because it was there, local, known, familiar, comfortably within reach. My Orlando, not a mythic emblem of capitalism and the decadent West. My gay Orlando. My fleeting disconnect fell apart.

Later that day, a CNN commentator grimly noted that first responders and investigators had forced themselves to tune out the cacophony of ringing phones rising all day from the 49 bodies strewn about Pulse. “All those people, their phones kept ringing,” he said.

That gut-wrenching image, mentioned only once, has haunted me more than the following days and weeks of memorials and tributes. I thought about my own mother’s call that morning. I thought about all those calls to Thomas.

Leading the parade were 49 men and women dressed in white shirts. Each of them held a stark white sign bearing the name of a Pulse victim. I pushed my way through the hushed crowd to take photos from behind the barricade. The solemn group of 49 marched slowly, deliberately, each holding their sign over their head.

And as they passed, I could hear several phones ringing from the pockets of the marchers. The signs remained aloft. Their phones kept ringing.

Previous Bill Would Make Pulse Nightclub A National Memorial
Next Bernie: Trump Believes In Socialism For The Wealthy