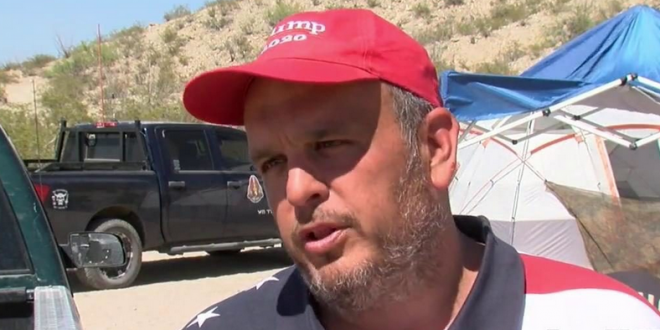 A member of an armed group known for stopping migrants at the U.S.-Mexico border has been arrested after authorities charged him with impersonating a U.S. Border Patrol agent, according to court documents.

Jim Benvie, spokesman for the Guardian Patriots, who have been camped at the border near Sunland Park, New Mexico, was arrested on Friday in Oklahoma after a warrant was issued on Wednesday in southern New Mexico.

The U.S. Department of Justice filed two federal charges, alleging that Benvie, 44, passed himself off as a Border Patrol agent in mid April. News photographs of Benvie taken in March showed him wearing a camouflage jacket with a badge reading “Fugitive Recovery Agent” and a patch with an eagle-head insignia.

And that’s not all:

Authorities in Oklahoma have charged border vigilante Jim Benvie with fraud after The Daily Beast reported he was suspected of running a child-cancer charity scam there.

Benvie, the spokesman for an armed group that calls itself Guardian Patriots, was hit with the new charge after the father of a child who survived cancer recognized Benvie from an article on The Daily Beast and contacted police in Oklahoma.

In an interview, the dad said Benvie has been using his son’s photos and story for years to raise money—but none of that money has gone to his son or his son’s care.

Previous AMA, Others: Climate Change Is A “Health Emergency”
Next Christian Prophetess: I Saw Angels Bombarding Trump Protesters To Drive Away Their “Demonic Infections”