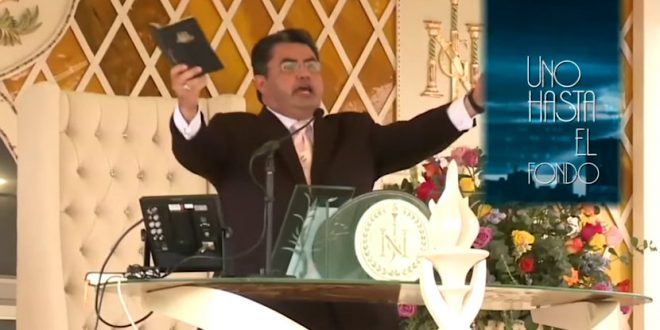 Megachurch Blasts “Slanderous” Child Rape Charges Against Leader: God Made Him An Apostle Of Jesus

The Mexico-based La Luz del Mundo church said Wednesday that its leader and “apostle” Naasón Joaquín García, who was arrested in California on charges of human trafficking and child rape, remains the spiritual leader of the group, which claims 5 million followers in 58 countries. It also strongly denied the charges.

“We believe these accusations are defamation and slander of our international director, the apostle of Jesus Christ,” said church spokesman Silem García, who is not related to Joaquín García. “His position as apostle of Jesus Christ was given to him by God, and for life, and he continues to lead the church.”

The accusations were particularly painful for a church that has tried to cultivate an image for its law-abiding, hard-working, conservatively-dressing people in Mexico — a country where it claims about 1.8 million followers. Its male members favor suits and short hair, and female members wear veils that cover their hair and modest dresses. There are about 1 million U.S. members.

Within hours after news broke that “the Apostle” had been arrested on human trafficking, rape and child pornography charges, bishops of La Luz del Mundo exhorted church members via video to start praying for their leader, and not stop. https://t.co/1Zo5zDlk7e

Naasón Joaquín García, 50, and other leaders of La Luz Del Mundo (Light of the World) were charged with human trafficking, production of child pornography, forcible rape of a minor and other felonies, authorities said.https://t.co/9fLvM233FQ

Naason Joaquin Garcia, leader of La Luz Del Mundo an international religious organization based in Mexico, has been arrested in California on charges of human trafficking, child rape and other felonies.#AFP 📸 @35mmfotografia pic.twitter.com/Dqg46olCxd

Images of the Holy Supper celebration show the ceremony evoking strong emotions among worshipers. People yelp and cry in the presence of Naasón Joaquín García, who was arrested. Here are photos @watcharaphotog took from the event https://t.co/p3wqmaHiSN pic.twitter.com/nNONvOaloT

The church claims millions of worshipers across the world. About 12% of its estimated 1 million U.S. members are in CA. A number of Light of the World temples are in SoCal, mainly in Latino communities like East L.A, Huntington Park and San Bernardino. https://t.co/VtB8xlMsQZ