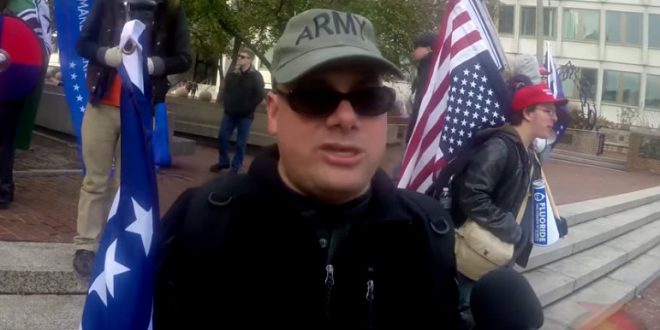 Meet The Extremist Behind The Straight Pride Parade

While the idea of a few dozen angry straight people marching might be funny, the actual origins of Straight Pride Parade are not. The event is a front for a far-right group founded by notorious right-wing brawler Kyle “Based Stickman” Chapman.

Straight Pride organizer Mark Sahady announced the parade on Facebook, claiming he received permits for the event that would likely take place on August 31.

But Sahady isn’t just a particularly aggrieved straight dude. Instead, he has a long history participating in controversial right-wing events around Boston as an organizer for Resist Marxism, a group Chapman founded at the height of the fame he earned attacking left-wing anti-fascist activists with his eponymous “stick.”

The details above emerged on Twitter almost immediately after the event was announced.

In Portland, Mark Sahady can ditch his Army hat & sunglasses for a helmet and body armor to join West Coast crypto-fascists in beating up as many leftists as they can before the police make a half-hearted attempt at stopping them. He’s on the edge of this image, licking his lips. pic.twitter.com/Uhr6rVUQ8x

Here’s Mark in Portland again, armed with a wooden pole for a supposedly peaceful protest. This is what Mark wants for Boston: not small “free speech rallies”, but grouping up geared for street fighting, doing as much as he can to injure and intimidate local left-wing activists. pic.twitter.com/u1BoPAmD3q

Not every organizer or frequent attendee of “Resist Marxism”/“Boston Free Speech” is so unsubtle that they tattoo Nazi imagery on their neck, post exclusively about fascism or speak at known white nationalist events. Some are a little more careful, like Mark Sahady. pic.twitter.com/3mRXiYiTx3

Previous German Nurse Gets Life Sentence For Killing 85 Patients
Next Pelosi To Jerry Nadler: I Want To See Trump In Prison