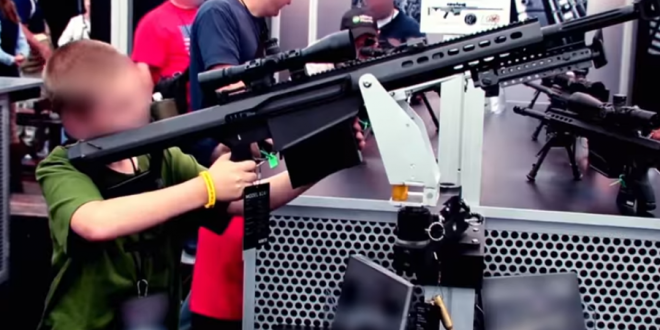 Madonna highlights the devastation of gun violence — and our maddening inability to take meaningful action to prevent it — in her chilling new “Gun Control” video. The clip contrasts the joy of nightclub dancing with the brutality of a mass shooting.

“The story you are about to see is very disturbing,” warns the opening text. “It shows graphic scenes of gun violence. But it’s happening every day. And it has to stop.”

From there, director Jonas Åkerlund cuts to the deadly shooting, a children’s choir singing at a church vigil, scenes from a Seventies-styled discotheque and modern-day protests against guns and the NRA. In-between, Madonna churns out the song’s lyrics on a typewriter.

Watch for NYC’s Gays Against Guns, who also get a shoutout in Madonna’s second tweet below, as do multiple other LGBT groups.

This is your wake up call. Gun violence disproportionately affects children, teenagers and the marginalized in our communities. Honor the victims and demand GUN CONTROL. NOW. Volunteer, stand up, donate, reach out.

Previous Christian Extremists Protest Obergefell Anniversary Outside Supreme Court To Crowd Of Nobody [VIDEO]
Next DNC Chair Tom Perez: Nobody Will Be Talking About Hand Size Or Silly Nicknames At Democratic Debates