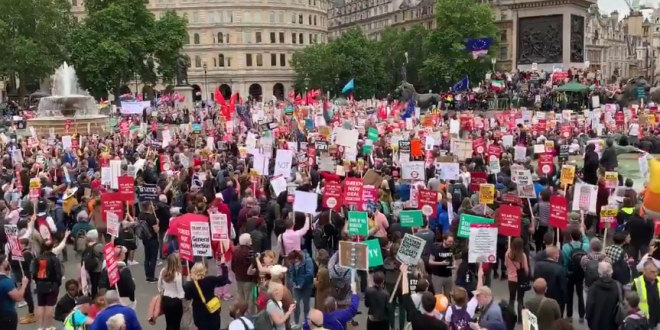 Unleashing the giant Baby Trump balloon once again, Britons protesting President Trump’s state visit vowed to bring central London to a standstill on Tuesday, holding demonstrations that are expected to draw large crowds throughout the day.

The balloon, which made its debut during Mr. Trump’s visit last July, depicts him as a scowling baby wearing a diaper and holding a smartphone. The 20-foot-tall balloon has since become a familiar rallying symbol for similar protests.

“Trump has repeatedly shown that he doesn’t respond to reason, to facts or to science. What he does respond to is humiliation,” Anna Vickerstaff, one of the organizers of the Trump blimp wrote. “Our balloon is part of a proud history of political satire in the U.K. that sends a clear, orange message to Trump and his politics of hate that they are not welcome here.”

One of the centerpieces of the London protests. Trump on a golden commode, and it talks, says “fake news” and “witch hunt” pic.twitter.com/AFiGhbXVGA

Protest about to set off from Trafalgar Square down toward Downing Street. The announcer leading a chant “say it loud say it clear – Donald trump not welcome here” then “We’re standing with the Americans resisting Trump” pic.twitter.com/FFxaTuxXdM