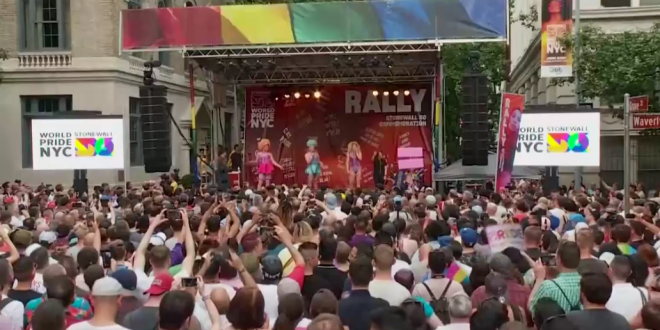 LIVE VIDEO: At The Stonewall 50 Rally In West Village

Visitors came from around the block and around the world, streaming through the streets surrounding the Stonewall Inn. Storefronts flew rainbow flags and pumped pulsing pop music onto the sidewalks, where vendors hawked Pride merchandise. Police officers sought refuge from the sweltering sun in doorways, and firefighters rested on their hulking red trucks.

The crowd outside the Stonewall included Chris Conzen, 42, of Roxbury, N.J., and his daughter, Sara, 10, who had come to Manhattan to see a Broadway show.

Mr. Conzen said he wanted to give Sara the “basics” about Pride, so they stopped in Greenwich Village. “I wanted her to know about the Stonewall, the harassment that happened 50 years ago and how a community finally started to fight back,” he said.

Previous Democrats Celebrate Stonewall: We See You, We Hear You, We Won’t Stop Fighting For Your Rights [VIDEO]
Next CHATTER AWAY: Overnight Open Thread