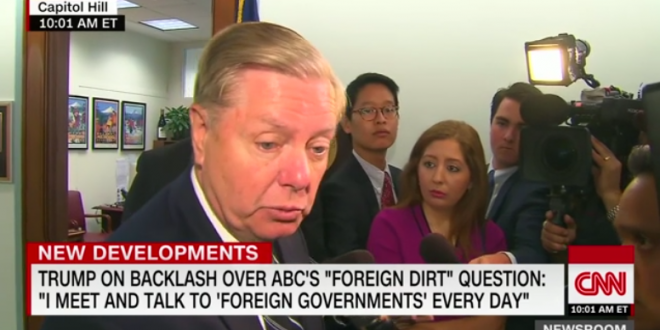 Lindsey Graham On Trump Accepting Dirt From Foreign Spies: “It’s A Mistake, I Don’t Want To Encourage This”

Trump’s engagement with Russian officials during his election in 2016 has been the subject of investigation and speculation. Special counsel Robert Mueller issued a report of his investigation in April.

During an interview Wednesday with ABC News’ George Stephanopoulos, Trump said that he would likely take information about his 2020 election rivals from foreign adversaries such as Russia and China.

“What are the implications of hearing the President of the United States saying it’s ok to accept foreign dirt about an opponent?”

The question today is how many other Republicans will criticize the president like Senator Graham?

.@LindseyGrahamSC says it was a “mistake” for President Trump to say he would accept dirt from a foreign country on a political opponent.

But, will there be more?

First, I believe that it should be practice for all public officials who are contacted by a foreign government with an offer of assistance to their campaign – either directly or indirectly – to inform the FBI and reject the offer.

But this has not been recent practice and we saw that come to a head during the 2016 presidential campaign.

During that race, we had a major American political party hire a foreign national, Christopher Steele, to dig up dirt on an American presidential candidate.

As if that was not bad enough, the foreign national compiled an unverified dossier that was then used by the FBI to obtain a warrant against an American citizen and surveil an American presidential campaign.

One of the corrective actions that I am pursuing is to ensure that foreign political operatives cannot be allowed to manipulate the American political system.

Changes of this nature will serve our democracy well.