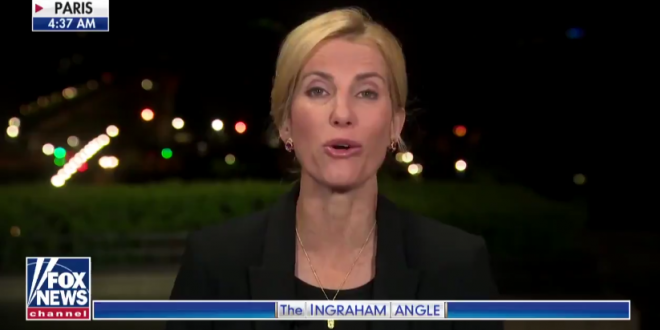 While hundreds of veterans gathered in France on Thursday waiting for commemorations to mark the 75th anniversary of D-Day to begin, President Trump sat nearby and joked with Fox News host Laura Ingraham about how he was “holding up” the ceremony to do an interview with her.

After airing the pre-taped interview on her program Thursday night, The Ingraham Angle host wanted her viewers to know that regardless of what the president had just said in the segment they’d watched, it was not true that he held up the ceremony.

“By the way, some of you may have heard or read that President Trump supposedly held up the entire D-Day ceremony in order to do this interview with me,” Ingraham exclaimed. “That is patently false. Fake news.”

Watch the clip. This is insanity.

Laura Ingraham tells her viewers not to believe what they just heard Donald Trump say. pic.twitter.com/xVdQCSnhkQ