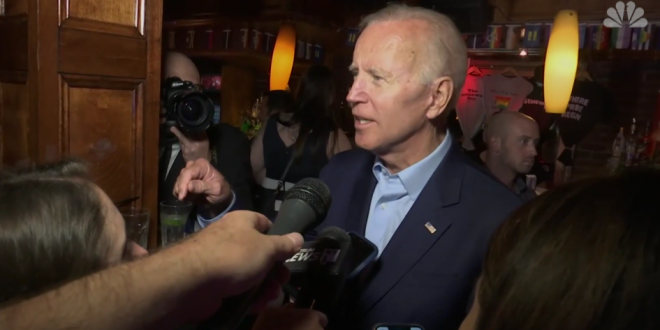 Those who rebelled at the Stonewall Inn almost 50 years ago could have never imagined who would stroll into the now-iconic bar Tuesday afternoon. After his second fundraiser of the day in New York City, former vice president and current 2020 presidential candidate Joe Biden was spotted talking with patrons and taking photos at the West Village gay bar.

Biden’s visit came as a surprise to many, including Mark Segal, the founder of Philadelphia Gay News and a longtime LGBTQ activist who was present at the 1969 Stonewall uprising — and during Biden’s visit Tuesday. “If you would have suggested something like this 50 years ago, the 18-year-old me would think you were an alien,” Segal told NBC News in an email.

‘BEER ON ME’: Former VP and 2020 candidate Joe Biden made an “unplanned stop” at NYC’s Stonewall Inn Tuesday where he chatted with patrons and treated everyone to a beer at the historic gay bar; this year marks the 50th anniversary of the Stonewall Riots. https://t.co/GhDJHrLStu pic.twitter.com/r7LFKurjj8

NEW:scene from Stonewall today,where Biden bought a round of beers, wrote a note excusing a kid from class,took selfies–&was celebrated by some attendees as a progressive on LGBT issues,at a time when he is criticized by other Ds as too centrist https://t.co/tw53Y1OLMF

Joe Biden and I meet in Stonewall pic.twitter.com/OgroxvFHCH