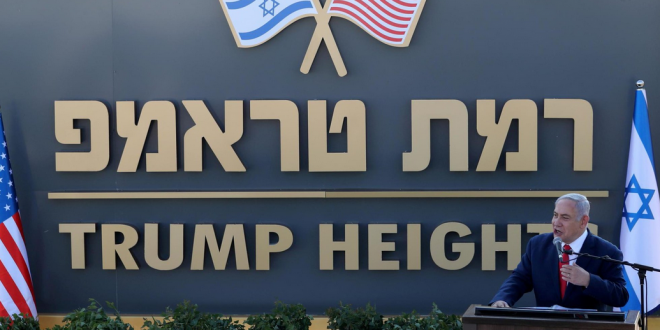 In huge gilded letters (what else?), on a piece of synthetic lawn (of course), a large sign was erected in the Golan Heights, as if taken directly from the best of comedy sketches. Ramat Trump, or Trump Heights, will be built here. Even the strong gusts, which made it difficult to put up the scenery, gave this ridiculous event the atmosphere of an Israeli satire – a moment before a variety of government ministers began their comically dramatic march toward the ceremony.

We’ll begin at the end. No new community named for U.S. President Donald Trump was actually established on Sunday in the Golan Heights. As even the founder of the Knesset caucus for the Golan, Kahol Lavan MK Zvi Hauser, observed: “Anyone who reads the fine print of the ‘historic’ decision understands that this is a conceptual decision. There is no funding. There is no planning. There is no location and there is really no committed decision.”

To my dear friends in the international press: A settlement by the name of “Trump Heights” or “Ramat Trump” doesn’t exist. It my exist in the future but the Israeli cabinet still hasn’t even decided to do it. For now there’s only a sign. A huge sign. Like Kim Jong Un’s envelopes