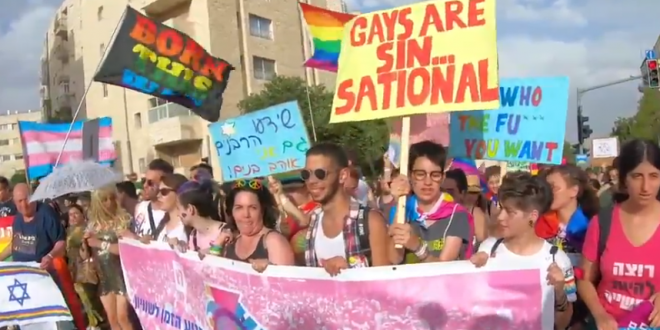 Thousands of people marched through the streets of Jerusalem on Thursday in the city’s annual gay pride parade, a festival that exposes deep divisions between Israel’s secular and Jewish ultra-Orthodox camps. Some 10,000 revelers waving rainbow flags joined the carnival-like procession, as over 2,500 police officers in plain clothes, in uniform and on horseback patrolled the crowd.

Police said they arrested 52 suspects who planned to disrupt the event, including a man carrying a knife near the parade route. A smattering of counter-protesters from an ultra-nationalist party jeered through megaphones and carried signs saying “Jerusalem is not Sodom” and “Keep the Holy Land holy.”

The parade passed peacefully this year, but has ended violently before: In 2015, an ultra-Orthodox extremist stabbed a 16-year-old girl to death and wounded several others. The assailant struck shortly after completing a 10-year prison sentence for stabbing participants at the 2005 march.

The celebration of depravity – not to mention the presence of thousands reveling in it – did not go over well with the city’s substantial orthodox population. Jan Markell, founder and director of Olive Tree Ministries, spoke with OneNewsNow and conveyed her discouragement over the event.

“I think where this gets kind of doubly troubling is the example of Sodom and Gomorrah [where] God looked down on Sodom and destroyed the whole city,” Markell explained. “But if you’re a pagan and the Bible means nothing to you, then I guarantee you [it means nothing to] these people participating in these activities.

Even though homosexuals can serve in the Israeli military, Orthodox Jews have wielded significant enough influence on Prime Minister Benjamin Netanyahu’s right-wing government to deny same-sex couples equal marriage and parental rights, which their American counterparts have.

Students from Hebrew Union College at the March! #JerusalemPride pic.twitter.com/Ys7QbZA3z4