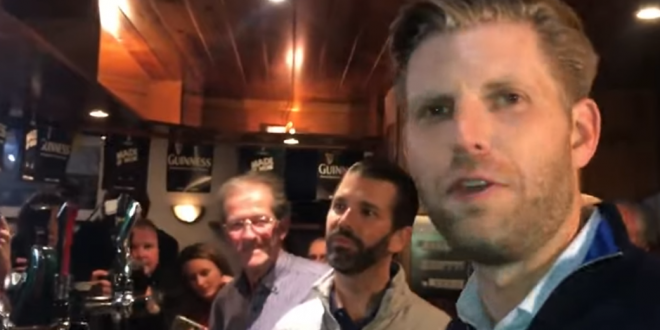 An Irish priest has said he is saving ‘a special place in heaven’ for Donald Trump’s sons Eric and Donald Junior after the two brothers visited a multitude of local pubs in Doonbeg on Wednesday night.

Doonbeg parish priest Joe Haugh had previously pledged a place in heaven for President Trump but has now extended that pledge to include his two sons and their families.

The priest gave Trump’s sons a portrait of a local 16th-century castle, adding that it was “testament to the work and strength” of the people of Clare. The portrait was presented to the Trump brothers in Igoe’s Bar in Doonbeg as the pair embarked on their village pub crawl.

So I got to ask @EricTrump a question as the Trumps did a pub crawl thru Doonbeg – is his trip a good use of US taxpayer money? ‘We’re just trying to have a good time’ the answer, poses for selfies, refuses to answer further & ducks into Madigans pub surrounded by fans &security

Ethics and cost questions arise as Trump’s adult children tag along and live high on the president’s overseas trip. https://t.co/Ersg42v1eE

Previous LONDON: Lesbian Couple Bloodied By Gang Of Men On City Bus After Refusing To Kiss For Their Amusement
Next World Leaders Sign Bottom Of D-Day Proclamation, Trump Scrawls Name At Top Above Document’s Title