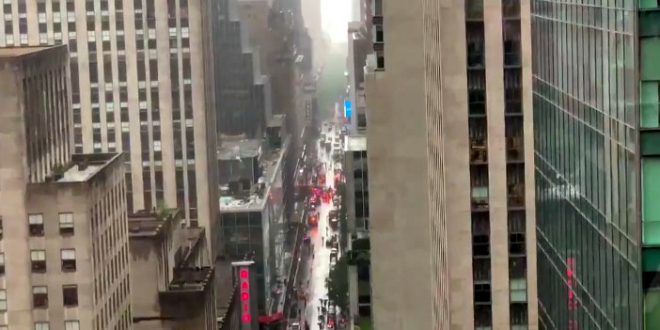 The FDNY is responding to a helicopter crash into the roof of a 54-story office building in midtown Manhattan, law enforcement officials tell News 4. The FAA has confirmed there is an accident. A report of the crash at Seventh Avenue and West 49th Street came in shortly before 2 p.m. No other details were immediately available. The city issued an emergency notification saying to expect road closures and the presence of emergency personnel at Seventh Avenue and West 51st Street.

787 7th ave, #midtown NYC. We’re 1 block south. 20 mins ago there was a loud sound like a too-low #helicopter & I looked up and saw sheet of flame on roof and then smoke. News reports saying helicopter/small plane crash onto roof which would be consistent with what I heard/saw. pic.twitter.com/swY3ksLskH

Scene at 52nd between 6th and 7th after plane/helicopter crash in NYC. Building was evacuated. pic.twitter.com/8XqDDRvr2C