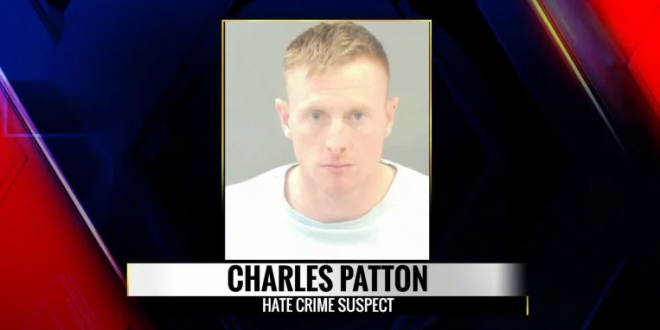 A man has been charged with a hate crime and threatening to kill LGBTQ residents in Soulard. On May 24, police received several 911 calls about property damage in the 1300 block of Sidney Street. While investigating what happened, police obtained surveillance video that showed a man committing the crimes. That man was later identified as Charles Patton, according to St. Louis police.

The whole time, he was screaming homophobic slurs at the people who lived inside. His screams also included threats of violence, including—repeatedly—“I am going to slit your throat,” police said. A man and woman who rent the home are gay. The homeowner painted part of the house in rainbow colors in honor of his daughter—who rents part of the home—and the man who live there, to make them feel welcome and comfortable, police said.

The homeowner told police the colorful paint was a show of support for his LGBTQ daughter, court documents say.  Police gathered video footage that shows a man attacking the home, causing more than $750 in damage both outside and inside the home while ranting against LGBTQ people, charging documents say.

St. Louis police said before charges were issued Friday that the man in the attack was highly intoxicated and also kicked a vehicle causing damage that night. At one point, police said he was in a fight outside the nearby Trueman’s Sports Bar, before falling and injuring himself. He was taken to a hospital.