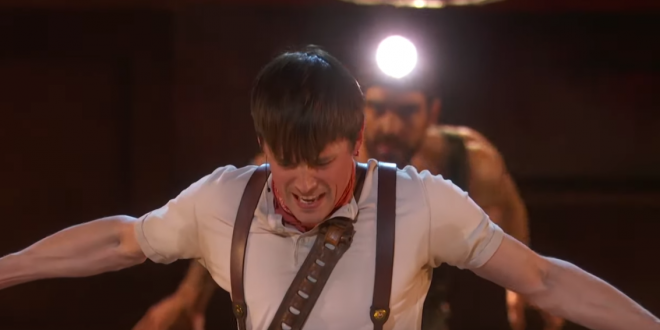 The win, coming at a time when Broadway is enjoying a long-running box office boom, marks the sixth year in a row that Tony voters have chosen an inventive show nurtured by nonprofits over more commercial fare.

“Hadestown,” dreamed up by a Vermont singer-songwriter who as a child became fascinated by the doomed love story of Orpheus and Eurydice, is at once tragic and hopeful, suggesting that the very act of storytelling can be a salve for sadness.

“Hadestown,” the brooding musical about the underworld, had a heavenly night at the Tony Awards, winning eight trophies Sunday, including best new musical and handing a rare win for a female director of a musical.

The crowd at Radio City Music Hall erupted when Ali Stroker made history as the first actor in a wheelchair to win a Tony. Stroker, paralyzed from the chest down due to a car crash when she was 2, won for featured actresses in a musical for her work in a dark revival of “Oklahoma!”

Best Revival of a Musical: “Oklahoma!”

Best Revival of a Play: “The Boys in the Band”

Best Direction of a Play: Sam Mendes, “The Ferryman”

Best Leading Actress in a Play: Elaine May, “The Waverly Gallery”

Best Featured Actress in a Play: Celia Keenan-Bolger, “To Kill a Mockingbird”

Best Scenic Design of a Play: Rob Howell, “The Ferryman”

Best Costume Design of a Play: Rob Howell, “The Ferryman”

Best Choreography: Sergio Trujillo, “Ain’t Too Proud: The Life and Times of the Temptations”