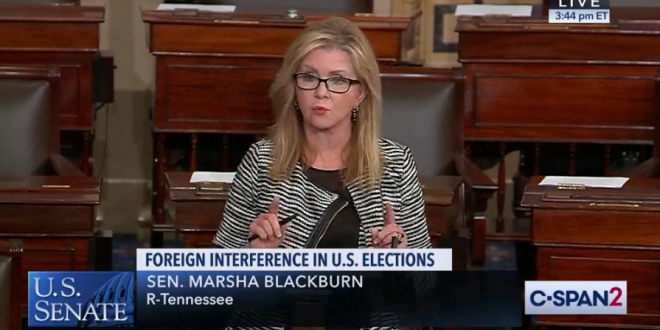 Sen. Marsha Blackburn (R-Tenn.) blocked an effort by Sen. Mark Warner (D-Va.) to pass a bill via unanimous consent requiring campaigns to report any offers of foreign assistance to the FBI.

“We are all for free and fair and honest elections. These reporting requirements are overbroad. Presidential campaigns would have to worry about disclosure at a variety of levels. So many different levels.”

Why it matters: President Trump’s comments on Wednesday that he would consider accepting intelligence on a political opponent from a foreign entity set off immediate outrage from Democrats, who see it as an invitation for foreign adversaries to interfere in future U.S. elections.

Schumer responds: “Shame on the republicans, it’s a new low for the republicans in the senate, for the president & our democracy. If you can say that a foreign power should be allowed to interfere in our elections with impunity without any recourse that is a very dangerous thing”

Sen @MarshaBlackburn recalling on the Senate floor how she heard people talking about communism during 4H fairs during her childhood.

If you drew Marsha Blackburn in the “which Republican senator will stand in for the whole party in blessing Trump’s invitation to foreign intelligence services to sabotage Democrats” raffle, please come collect your prize.