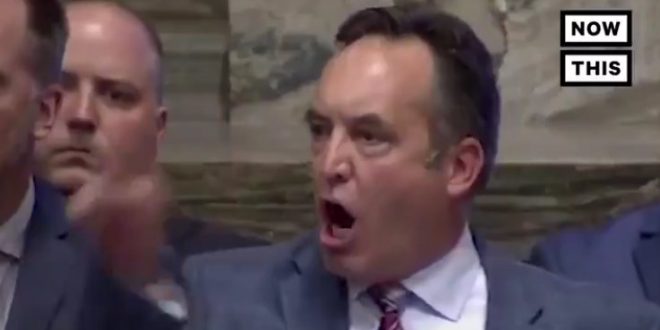 Pennsylvania’s state Senate erupted this week over a bill that ended funding for the some of the poorest residents, leading a Republican lawmaker to shout over his Democratic colleague for nearly three minutes.

Republicans have pushed to end the decades-old General Assistance program but Democrats on Wednesday introduced amendments to save the monthly funding for certain populations, such as domestic violence victims, people with disabilities or veterans, Penn Live reported.

Freshman state Sen. Katie Muth (D) began reading a letter from John Boyd, a formerly homeless man from Philadelphia who said the state’s program was a “second chance at life.” But Senate Majority Leader Jake Corman (R) made a motion to cut off the debate and called for a vote.

State @SenatorMuth refused to stop reading a letter from a man who experienced homelessness even though her male colleague tried to shout her down for minutes on end pic.twitter.com/ztuYHJO8k8

Watch PART 1 of Republican leadership attempting to shout down @SenatorMuth as she reads into record comments from John Boyd — whose life was saved thanks to receiving money from the PA General Assistance program. #SaveGA pic.twitter.com/bR9ctQivmf

PART 2 of Republican leadership attempting to silence @SenatorMuth and @PaSenateDems from offering comments on a bill to eliminate the the PA General Assistance program.