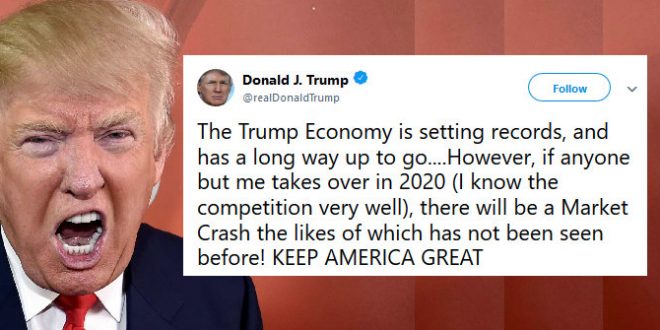 Glorious Leader: Markets Will Crash If I Lose In 2020

President Donald Trump on Saturday simultaneously attempted to talk up his economic achievements while warning of financial doom and gloom if he is not reelected in 2020.

While a number of traditional economic indicators, including unemployment and job growth, have continued to be a positive for the Trump administration, a recent survey from Bankrate.com found that nearly half of American adults — some 47 million people — feel they are currently worse off now than they were before the Great Recession.

One of the reasons, notes the survey, is the lack of wage recovery. Around 55 percent of survey respondents said they are now making the same — or less — than they were in 2007, before the economic collapse that took down markets on a global scale.

The Trump Economy is setting records, and has a long way up to go….However, if anyone but me takes over in 2020 (I know the competition very well), there will be a Market Crash the likes of which has not been seen before! KEEP AMERICA GREAT

How will the flowers bloom and the vegetables grow without your tiny fingers pointing in the direction of the sun?

How will bridges get built and babies get made without your social media rants about Bette Midler or NFL players kneeling?