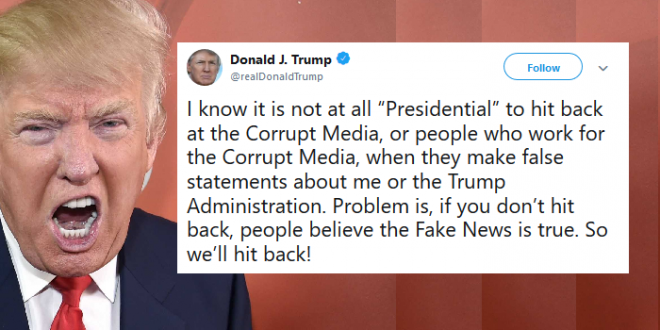 Glorious Leader Admits He’s “Not At All Presidential”

Donald Trump took up his media Twitter cudgel again Saturday night and went after “Little Donny Deutsch” after the MSNBC host called the president a criminal.

Deutsch has been particularly hard on Trump lately. On Friday he called him a “despicable human being” on “Morning Joe” for a vicious attack on Rep. Nancy Pelosi (D-Calif.) as Trump was interviewed in front of the gravestones of war dead on the anniversary of the D-Day landings.

Deutsch also suggested more than a week ago that “impeachment” should be “rebranded” as the “Trump criminal investigations.”

The word “presidential” – including the scare quotes – is trending at #1 on Twitter this morning.

Little @DonnyDeutsch, whose show, like his previous shoebiz tries, is a disaster, has been saying that I had been a friend of his. This is false. He, & separately @ErinBurnett, used to BEG me to be on episodes of the Apprentice (both were bad), but that was it. Hardly knew him,..

….other than to know he was, and is, a total Loser. When he makes statements about me, they are made up, he knows nothing!

I know it is not at all “Presidential” to hit back at the Corrupt Media, or people who work for the Corrupt Media, when they make false statements about me or the Trump Administration. Problem is, if you don’t hit back, people believe the Fake News is true. So we’ll hit back!

Watched MSNBC this morning just to see what the opposition was saying about events of the past week. Such lies, almost everything they were saying was the opposite of the truth. Fake News! No wonder their ratings, along with CNN, are WAY DOWN. The hatred Comcast has is amazing!