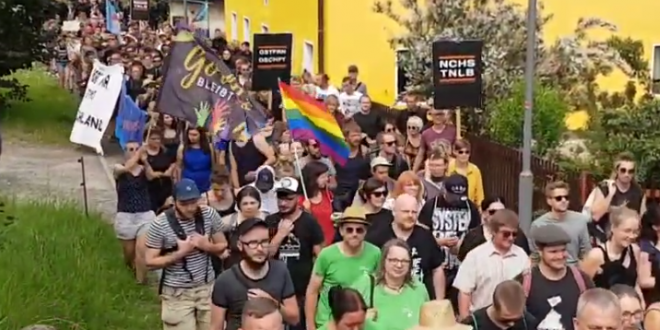 GERMANY: Protesting Locals Buy Up All The Beer In Town So Nazi Music Festival Can’t Have Any [VIDEO]

Residents of Ostritz, Germany, bought up hundreds of crates of beer to keep it out of the hands of neo-Nazis descending on the town for a music festival, according to the BBC.

A Dresden court imposed a ban on the sale and possession of alcohol at the “Shield and Sword” festival, prompting police in the state of Saxony to confiscate more than 1,000 gallons of beer Friday and Saturday.

Suspecting the festival attendees would seek to buy alcohol at the local supermarkets instead, town residents reportedly bought more than 200 crates.

Officers from the nearby city of Görlitz were supported by federal police and riot squads from Saxony and other German states.

A 33-year old bass-player who put on a balaclava during a concert was interviewed afterwards by police. An investigation has begun for a possible violation of the law of assembly.

About 750 people registered to participate in the event, which featured concerts with right-wing extremist bands. In the event, police said about 600 people took part. Around midnight on Saturday in Ostritz, there were fewer than 500 people around the central rail station.

An Ostritz society activist, Georg Salditt, told Germany’s popular Bild daily: “The plan was devised a week in advance. We wanted to dry the Nazis out. We thought, if an alcohol ban is coming, we’ll empty the shelves at the Penny [supermarket].”

A local woman explained to ZDF television why the neo-Nazis were unwelcome. “For us it’s important to send the message from Ostritz that there are people here who won’t tolerate this, who say ‘we have different values here, we’re setting an example, which is not the image of a far-right concert, which dominates the media coverage’.”