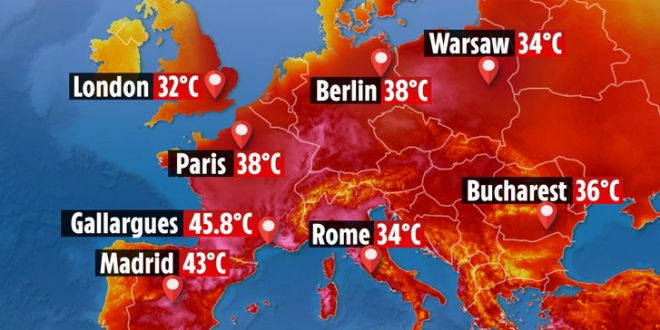 The extreme heat wave that is suspected in killing several people this week set an all-time high in France on Friday. Relief is on the horizon but not before the heat strengthens its grip across Europe this weekend.

The highest temperature ever measured across France in the entirety of record keeping was set on Friday afternoon. Temperatures soared to 45.9 C (114.6 F) at Gallargues-le-Montueux in southeastern France, exceeding the nation’s previous all-time record high of 44.1 C (111.4 F) at Conqueyrac on Aug. 12, 2003.

Amid the unrelenting grip of dangerous heat, France’s national weather service issued the first ever “red” hazardous weather warning for southeastern portions of the country on Friday. A “red” warning is the highest level out of a four-level alert system put into effect after the deadly 2003 heat wave that claimed 15,000 lives

Previous Rush Limbaugh: Democrats Are A Bigger Hate Group Than The KKK, More Hateful Than Charlottesville Nazis
Next German Burger King Ad Celebrates Same-Sex Marriage With Diamonds Made Of Whoppers And An F-Bomb