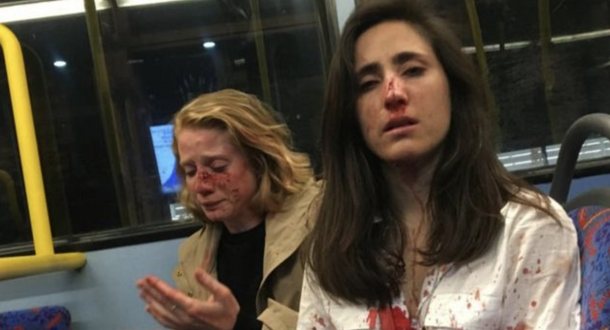 A homophobic assault on two women on a bus that left them needing hospital treatment has been labelled a “disgusting, misogynistic attack” by the London mayor, Sadiq Khan. The attack happened in the early hours of 30 May when Melania Geymonat, 28, boarded a bus with her girlfriend, Chris. The couple said they were attacked after refusing to kiss at the request of a group of young men on the bus.

A Met police statement said: “Four males aged between 15 to 18 have been arrested on Friday 7 June on suspicion of robbery and aggravated GBH. They have been taken to separate London police stations for questioning.” Photographs of the bloodied faces of the women had been circulating earlier on social media, and politicians have condemned the attack. The prime minister, Theresa May, said: “This was a sickening attack and my thoughts are with the couple affected.

This was a disgusting, misogynistic attack. Hate crimes against the LGBT+ community will not be tolerated in London.

The @metpoliceuk are investigating and appealing for witnesses. If you have any information – call 101. https://t.co/4zSqxyE6IP

Previous Extremely Stable Genius: The Moon Is Part Of Mars
Next Fox Contributor On Admissions Scandal: If Your Idiot Kid Is Too Stupid To Get Into Yale, Why Does It Matter?