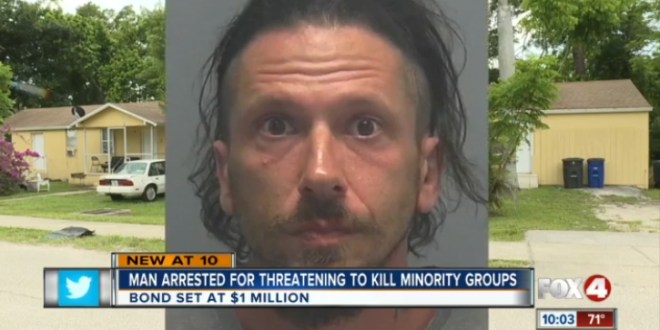 A Fort Myers man was arrested Friday for posting statements and videos inciting violence against minority groups on social media. The Florida Department of Law Enforcement received a tip that the man, who was using an alias, was posting to sites like Bitchute and Gab.

The posts showed his “hatred toward several minority groups, threatened violence against those who disagreed with him and encouraged followers to start a race war,” according to FDLE.

The videos showed him with weapons, while his written statements praised mass shooters, like Dylann Roof, calling them “heroes.” After the California synagogue shooting and New Zealand mosque shootings, he posted that he wished they’d killed more people, the PIO said.

They arrested him and booked him into the Lee County Jail for intimidation, sending written threats to kill and possession of a weapon by a convicted felon. Leff’s bond was set at $1,100,000 during his first court appearance on Saturday. He is due in court next on July 15.

Authorities says Leff’s targets included blacks, Jews, and gays. There’s no mention of any support for Trump. Yet.