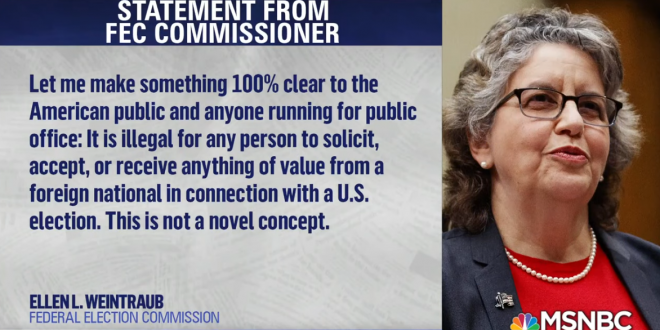 Federal Election Commission Chairwoman Ellen Weintraub released a statement Thursday making clear that candidates for public office may not receive help from a foreign government, in what appeared to be a warning to President Trump, who said he would consider taking information about an opponent from another country.

Tweeting her statement, Weintraub wrote, “I would not have thought that I needed to say this.” The head of the agency responsible for campaign finance laws clarified that any campaign that accepts help from a foreign government “risks being on the wrong end of a federal investigation.”

“Let me make something 100% clear to the American public and anyone running for public office,” Weintraub wrote. “It is illegal for any person to solicit, accept, or receive anything of value from a foreign national in connection with a U.S. election. This is not a novel concept.”

I would not have thought that I needed to say this. pic.twitter.com/T743CsXq79