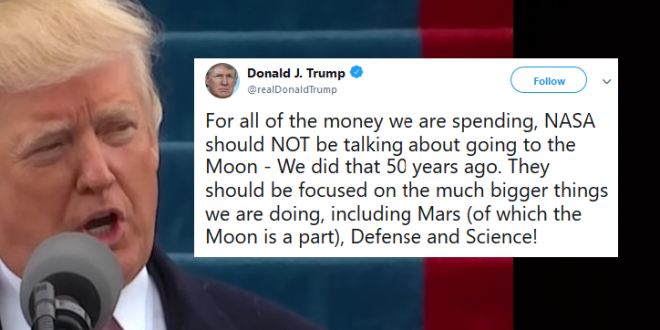 Extremely Stable Genius: The Moon Is Part Of Mars

To the moon? Nope, President Donald Trump says. Trump tweeted Friday that NASA should forget about going back to the moon and should focus on other things, like Mars. Trump’s comments came one day after NASA Administrator Jim Bridenstine said the agency won’t be able to meet a 2024 deadline to land astronauts on the moon unless Congress approves the Trump administration’s request for an additional $1.6 billion in next year’s budget.

For all of the money we are spending, NASA should NOT be talking about going to the Moon – We did that 50 years ago. They should be focused on the much bigger things we are doing, including Mars (of which the Moon is a part), Defense and Science!

Mars has its own moons. They’re called Phobos and Deimos. But the moon that Trump refers to orbits the Earth and has nothing to do with Mars other than being part of our solar system.

TIL the moon is part of Mars.

Technically the the moon and Mars are separate parts of the same sound stage.

Really hoping it’s a clear sky tonight so I can get a picture of the moon, caption it with “Wow, look at Mars tonight!” and collect those sweet, sweet topical likes.

You know, I thought the moon as a part of mars thing was just some funny Twitter shit but nope, nope, nuh-uh, satire and parody is way the fuck dead.

Moon is part of Mars is going to lead to moon truthers and Qanon people joining forces pic.twitter.com/faIakE0rs6

The moon is not part of Mars.