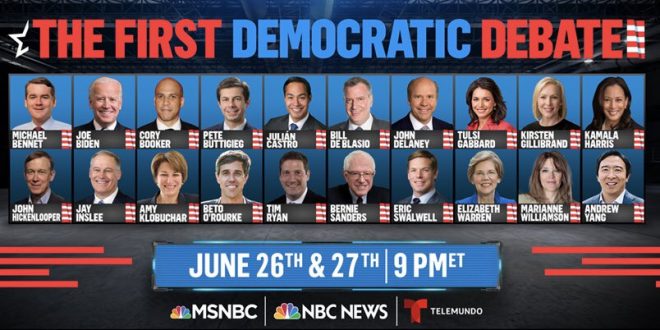 The Democratic National Committee has announced the 20 candidates who have qualified for the party’s first presidential primary debates later this month. Montana Gov. Steve Bullock was the most high-profile candidate left off the list. He failed to reach the party’s polling or grassroots fundraising thresholds.

U.S. Rep. Seth Moulton of Massachusetts, former U.S. Sen. Mike Gravel of Alaska and Miramar, Florida, Mayor Wayne Messam were among the others who missed the threshold for the debate. Bullock’s campaign has argued that he should have qualified but that the DNC changed its rules midstream, a charge that DNC Chairman Tom Perez rejects.

The DNC previously announced that the top eight candidates will be split over the two nights of the first debates. Which four will appear on each night will be revealed tomorrow.

BREAKING: DNC announces the names of the candidates who will appear in the first Democratic Debates on June 26 & 27 from Miami. @chucktodd: “After months of campaigning and polling, the stage is now set.” pic.twitter.com/fQbafzHr26