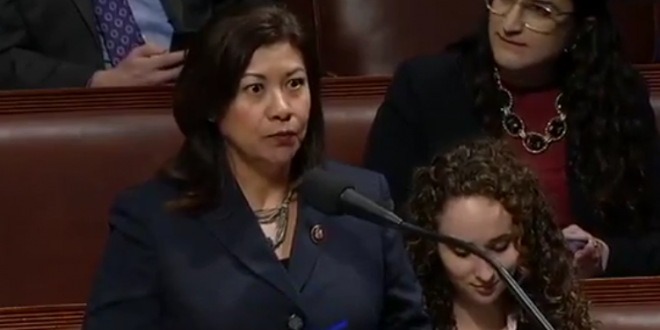 “Mr. Speaker, it is tiring to hear from so many sex-starved males on this floor talk about a woman’s right to choose,” Torres said as lawmakers debated a rule setting up amendment consideration for a four-bill spending package that includes funding for public health programs.

Torres, one of the newest members of the House Rules Committee, clearly broke House Rules — members cannot personally impugn their colleagues on the floor. Her remarks triggered audible outrage — and numerous calls for a point of order — from the Republican side of the chamber.

Being cited for a point of order violation can result in the House member being silenced for the rest of the day and having all of that day’s comments stricken from the public record. But watch the clip.

WATCH: “Mr. Speaker, it is tiring to hear from so many sex-starved males on this floor talk about a woman’s right to choose,” Rep. Norma Torres says on the House floor. pic.twitter.com/bghN3pvz71

A little dustup on the House floor, as Rep Norma Torres D-CA uses the phrase “sex starved males” to object to GOP criticism on abortion policy

I am sorry but during these amazing remarks, the staffer seated next to Congresswoman is everything. #NormaTorres

Previous Muslim Comedian Wins $4.1M Judgment Against Nazi
Next Trump Tells ABC News: If China Or Russia Offered Me Dirt On My 2020 Opponent “I Think I’d Take It” [VIDEO]