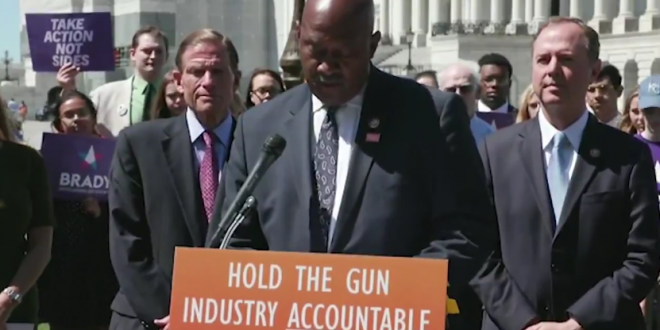 House and Senate Democrats introduced legislation Tuesday they say will allow victims of gun violence to have their day in court. The Equal Access to Justice for Victims of Gun Violence Act aims to repeal federal protections blocking firearm and ammunition manufacturers, dealers and trade groups from most civil lawsuits when a firearm is used unlawfully or in a crime. Those protections date to 2005, with the passage of the Protection of Lawful Commerce in Arms Act.

Rep. Adam Schiff, D-Calif., one of the bill’s co-sponsors, said since PLCAA became law, state and federal courts have “dismissed numerous cases against the gun industry,” adding that other cases were likely not brought at all. Schiff, surrounded by members of gun violence prevention groups including Moms Demand Action, Brady and March For Our Lives, said the purpose of the legislation was to “correct the error Congress made” nearly a decade and a half ago

Victims of gun violence deserve their day in court.

Watch as @SenBlumenthal and I, alongside activists with @MomsDemand, @NewtownAction, @bradybuzz & @GiffordsCourage, introduce legislation to hold the gun industry accountable: https://t.co/qmPp8mH9XF

This morning, I joined @RepAdamSchiff + @SenBlumenthal as they re-introduced the Equal Access to Justice for Victims of Gun Violence Act, which would #RepealPLCAA, so victims of gun violence & their families can FINALLY sue gun manufacturers for illegal and/or defective guns. pic.twitter.com/drQBY1AGEb