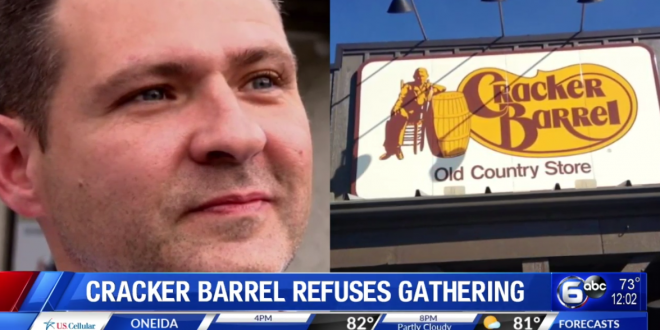 A Cracker Barrel in Cleveland, Tennessee, turned away Knox County Sheriff’s Office Detective Grayson Fritts and his church group, citing the restaurant chain’s zero-tolerance policy for “discriminatory treatment or harassment of any sort.”

Fritts and his tiny independent Baptist church in Knoxville had planned a meeting at the Cracker Barrel on June 29. Cracker Barrel said it is not affiliated in any way with Fritts his church “and we disagree strongly with their statements of hate and divisiveness,” the Lebanon, Tennessee-based, national restaurant chain said in a statement.

The chain said it told the church its event will not be allowed. “We serve everyone who walks through our doors with genuine hospitality, not hate, and require all guests to do the same,” the restaurant said.

Two weeks ago Fritts made national news for a sermon in which he called for the police to round up and execute LGBTs. Fritts then appeared at the three-day “death to gays” conference in Orlando to “celebrate” the Pulse Massacre.

Previous Bernie Sanders Rages: The Cat Is Out Of The Bag As “Corporate Dems Are Now Publicly Anybody But Bernie”
Next NYC Couple Spent Millions Backing Anti-Vax Movement