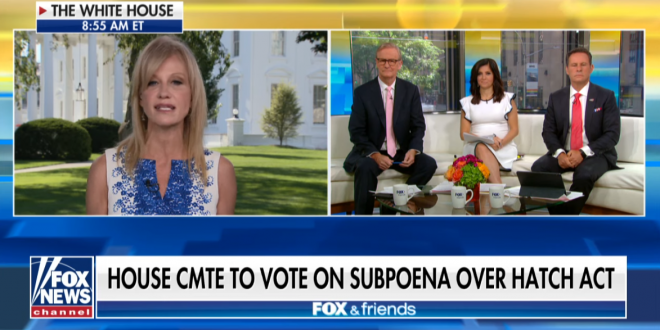 Conway: Liberals Want To “Put A Big Roll Of Masking Tape Over My Mouth” To Stop My Hatch Act Violations

Kellyanne Conway on Monday claimed allegations she violated the Hatch Act are politically motivated, after a House committee floated a subpoena for the White House counselor.

The House Oversight and Reform Committee will vote this week on a subpoena to compel Conway to testify on the Office of Special Counsel’s (OSC) finding that she violated the law barring officials from weighing in on elections in their government capacity.

“You know what they’re mad about?” Conway said during an appearance on “Fox & Friends” on Monday. “They want to put a big roll of masking tape over my mouth because I helped as the campaign manager for the successful part of the campaign.”

Previous SCOTUS Okays FUCT, No Other Major Rulings Today
Next AMA, Others: Climate Change Is A “Health Emergency”