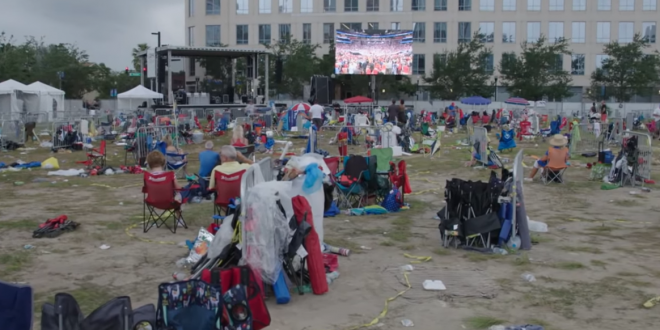 “In the run-up to this thing, Trump and his folks kept saying that this thing was oversold,” Stephen Colbert explained. “Something like 100,000 tickets or 120,000— something like that— for only 25,000 seats in the arena.”

“That’s why they said they had to have that ’45 Fest’ out in the parking lot for the overflow crowd of 75,000 people who couldn’t get in. That is impressive.”

“That is also a lie,” Colbert added, after a beat. “And I know that’s a lie, because we sent a camera crew down there, with Jim Anchorton and Jill Newslady from ‘Real News Tonight,’ and this is footage they brought back from outside during the speech of that supposed overflow crowd.”

As you’ll see in the clip at the 8:45 mark, Colbert’s crew was able to walk right into the arena and find plenty of seats as the rally started. And the stick around for the fake Paula White.