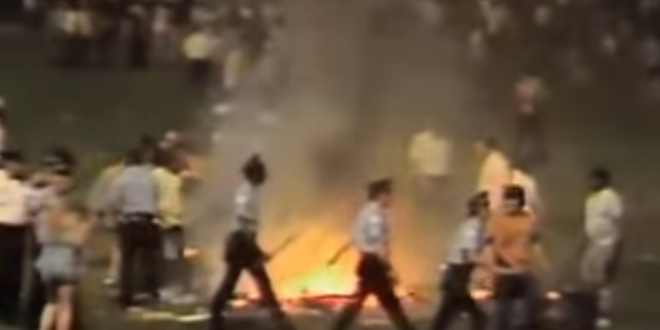 “There’s an undercurrent of hatred for disco,” said the much-despised shock jock Steve Dahl, infamous for starting Chicago’s Disco Demolition in Comiskey Park. In a publicity stunt concocted the summer of 1979 during a Chicago White Sox game against the Detroit Tigers, Steve Dahl encouraged everyone to bring their Disco records in order to destroy them.

Dahl blew up the records to a cacophony of “Disco Sucks!” inciting chaos and mayhem amongst the crowd. Some of the 50,000 fans in the packed Comiskey Park stormed the field, creating a near riot. They were eventually dispersed by Chicago riot police and the second game was forfeited to Detroit.

Forty years later, the Chicago White Sox will memorialize this unfortunate incident in Chicago’s musical (and sports) history. This Thursday June 13th, Steve Dahl has been invited to throw out the first pitch when the White Sox play the New York Yankees.

The White Sox plan to give away 10,000 t-shirts reading “The Night That Records Were Broken.”

From Wikipedia’s entry on the 1979 event:

Dahl regularly mocked disco records on the radio. Dahl also recorded his own song, “Do Ya Think I’m Disco?”, a parody of Rod Stewart’s disco-oriented hit “Da Ya Think I’m Sexy?”. The song characterized discotheques as populated by effeminate men and frigid women. The protagonist, named Tony after Travolta’s character in Saturday Night Fever, is unable to attract a woman until he abandons the disco scene, selling his three-piece white suit at a garage sale and melting down his gold chains for a Led Zeppelin belt buckle.

“Your most paranoid fantasy about where the ethnic cleansing of the rock radio could ultimately lead. White males, eighteen to thirty-four are the most likely to see disco as the product of homosexuals, blacks, and Latins, and therefore they’re the most likely to respond to appeals to wipe out such threats to their security.”

In the middle of this year’s #Pride the Chicago @WhiteSox will celebrate #Disco Demotion Night.

Come for the memories of homophobia and racism, and get a free t-shirt? 😒#Chicago is better than this.https://t.co/oCEdyyiO0u

“All of this will happen a few steps from the Progressive Baptist Church where the life of Frankie Knuckles was celebrated: one of the most prominent figures of Disco / House Music” https://t.co/oCEdyy1cBU

Everyone please read and share. Chicago is the home of house music, not the home of hate. This cannot stand during Pride month or any other month. https://t.co/3LyslP36yo

No one destroys art meaninglessly. You cannot dissociate a burning pile of records from the object that they stand in for.

Public annihilation of art is always the antecedent of a body.