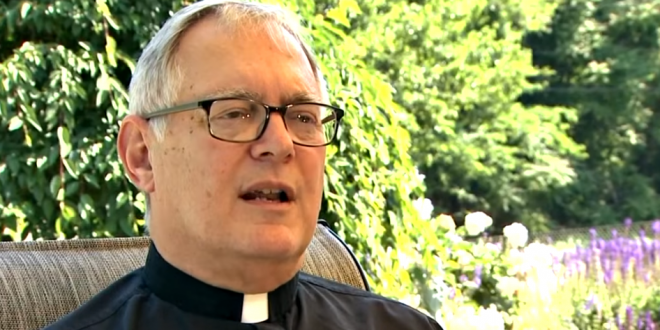 Roman Catholic Bishop Thomas J. Tobin tweeted Saturday that church members should not show support for Pride Month events, a message that drew a lot of attention on social media and brought a critical response from a Rhode Island gay-rights group. Some tweeters referred to sexual abuse by Catholic priests, particularly by priests in Pennsylvania, where a grand jury report said the Catholic Church covered up decades of sexual abuse by more than 300 priests.

From 1992 to 1996, Tobin served as auxiliary bishop of Pittsburgh, one of six Pennsylvania dioceses covered in the grand jury report. In August, Tobin acknowledged that he “became aware of incidents of sexual abuse when they were reported to the diocese,” but said they were outside his realm of responsibilities. As of about 9 p.m., Tobin was trending on Twitter. His tweet had about 1,800 retweets and 6,100 likes.

On Twitter and Facebook, Rhode Island Pride called Tobin’s remarks “shameful” and announced it will hold a demonstration on Sunday, 6:30 p.m., in front of the Cathedral of Saints Peter and Paul in Providence. “Since Bishop Tobin called on Catholics to abandon Pride & the LGBTQIA+ community — we are taking Pride directly to them,” the event’s organizers tweeted.

“We woke up this morning and we saw the bishop’s tweet and were honestly flabbergasted,” said Joe Lazzerini, the president of Rhode Island Pride in an interview Saturday night. “He is like the Donald Trump of the Catholic Church, he goes on Twitter and spews out hate,” Lazzerini.

Lazzerini said that he especially took offense at Tobin’s assertion that the LGBTQ community is harmful to children “especially considering the Catholic Church’s history of covering up clergy sexual abuse of children.”

Vicious quotes from Tobin regularly appeared on JMG during the battles to repeal DADT and legalize same-sex marriage.

A reminder that Catholics should not support or attend LGBTQ “Pride Month” events held in June. They promote a culture and encourage activities that are contrary to Catholic faith and morals. They are especially harmful for children.

Investigate the paedophiles in your ranks who use their power to predate on the innocent. Send your countless riches, stored in vaults and crypts and offshore accounts, to those who starve and live in penury.

Then come and tell me how to life my life.

Shame on you. LGBT kids are thrown out on the streets and abandoned because of poisonous thinking like yours.

I’m a straight man raised a catholic and your tweet has annoyed me so much I’m gonna give some lad a hand shandy in you honour.

But here’s a man you’ll get behind:
“I moved on her like a bitch, but I couldn’t get there. And she was married. Then all of a sudden I see her, she’s now got the big phony tits and everything. She’s totally changed her look.”https://t.co/P7qSzFvrDZ

Don’t recall any Pride events being sued for harming children.

“A scathing grand jury report last year said the Catholic Church covered up decades of sexual abuse of some 1,000 victims by more than 300 priests in Pennsylvania, where Tobin was formerly posted.”https://t.co/C3MAx5IYsT

I would trust my four kids more at a pride parade than in a Catholic Church. For so many reasons.

NEW: Bishop Tobin says they will be publicizing the names of priests “credibly accused” of sex abuse in the new year. https://t.co/zHTs6ie69u

Previous Pirro: Mueller Colluded With The Democrats [VIDEO]
Next BRITAIN: London Mayor Sadiq Khan Compares Trump To “Fascists Of The 20th Century” Ahead Of State Visit