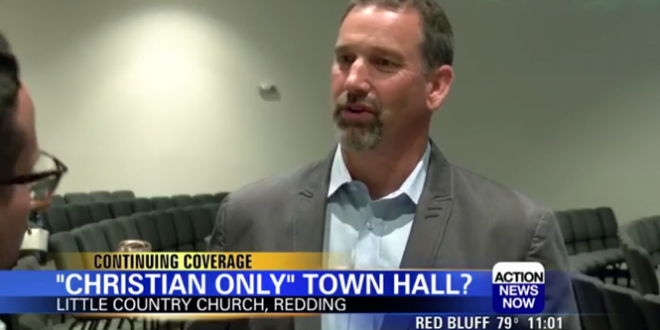 A newly elected State Senator held a town hall meeting and while they said everyone was welcome, it did not appear that way on the invite. “I did not win this race. God won this race,” said Brian Dahle during the Town Hall meeting. “If I wasn’t supposed to be in the Senate, I wouldn’t be in the Senate,” said the newly sworn-in California Senator during a Faith and Values Town Hall Thursday night.

“People want to know where you stand, where you draw the line on certain issues. I tried to share that tonight,” said the Senator. Some took to online to criticize the event, specifically the description, which said, in part, “Christians from local churches are invited to a Faith & Values Town Hall with your newly elected senator.” When asked about the critics of this event, Dahle said, “Halleluja! They are getting to use their constitutional right to say that they don’t agree with what I’m doing.”