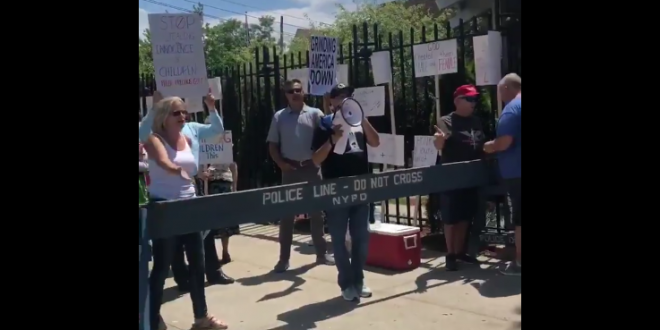 Supporters and opponents of the Gerritsen Beach Library’s premier Drag Queen Story Hour clashed Thursday as performer Angel Elektra read to children inside. As the Gerritsen Avenue branch of the Brooklyn Public Library began advertising its first local installment of the story hour, outraged neighbors started pushing a flyer of their own.

The leaflet – seen scattered throughout Gerritsen Beach as well as posted to various neighborhood Facebook groups – called for protesters to convene at the branch one hour prior to Thursday’s event, through to its scheduled end at 3 p.m. Objectors argued that the “tax-payer funded attack on our babies” aimed to “groom children into the transgender lifestyle.”

Anti-DQSH organizer Tag – a local father who spoke to the Brooklyn Eagle prior to the event but declined to give his last name, said, “I just don’t want my children around this guy. You have to hate these children if you want to encourage this sort of mental disorder.”

“I was rather appalled by it simply because I really feel that it is not just a diversity issue but a morality issue,” said James Bickle. “It’s especially bad because it’s an indoctrination of little children.”

“Parents should at least be confronted with the truth. They don’t know what they’re doing to these little kids,” he said. “It’s perverting them. It’s unnatural.”

“I would also have a problem if it were a gay person. And it’s not that I hate gay people. I actually have compassion for them, and I want to help them out this lifestyle,” he said. “I think its a choice.” 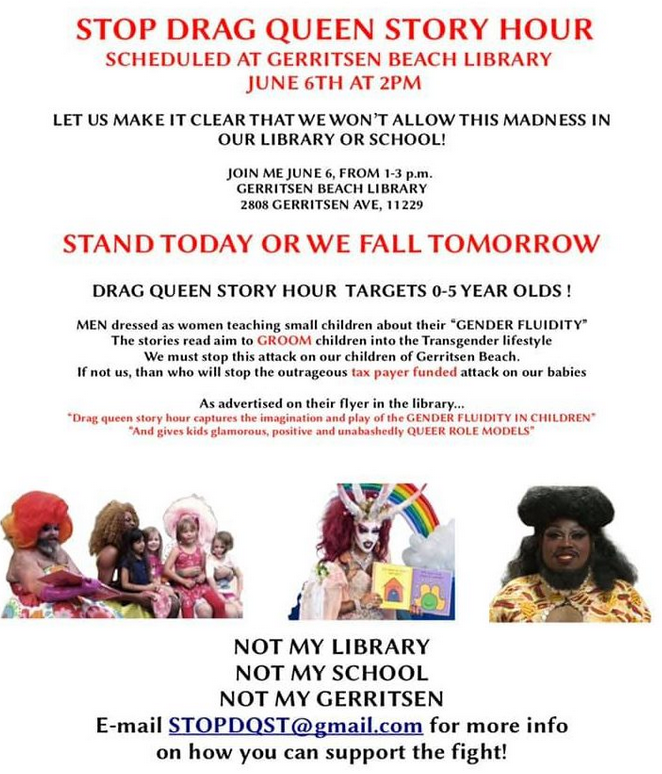 We are proud to welcome Drag Queen Story Hour to the Gerritsen Beach Library and condemn the hate speech against it in the strongest possible terms. I stand with Brooklyn’s LGBTQIA community against intolerance. https://t.co/e8ZteUP5RP

Today there was a protest against a Drag Queen Story Hour in Brooklyn. It was met with a counter protest. pic.twitter.com/35uNf9n8cT

I am here at the Brooklyn public library in Gerritsen Beach to support Drag Queen Story Hour, where a group of supporters are here to show our love for the event, in response to protesters who are here with a message of hate and bigotry. All photos and videos free for media use. pic.twitter.com/WknzY6AYwV

a prayer station has been set up pic.twitter.com/MCptAa3W8t

a guy with a maga hat just arrived. a woman told me “we are not against loving who you want to love, but just don’t take away our kids innocence. kids shouldn’t be raped in bathrooms by men who think they are women.” pic.twitter.com/9pL2AJbcau

both sides are shouting at each other pic.twitter.com/LYVtpq33kV

let me hear u scream for people who marry their cats THE GUY WITH THE MICROPHONE SAID.

“snapchat has a filter that says love has no age. love does have an age. no one has the right to pervert a child. “ pic.twitter.com/9z7h5D2BNT

guys what flag is this???? pic.twitter.com/vMoZQHoBbN

story hour is done. kids are waiting to meet and play with the drag queen; she’s quite popular here! pic.twitter.com/f6NPO0I3CJ