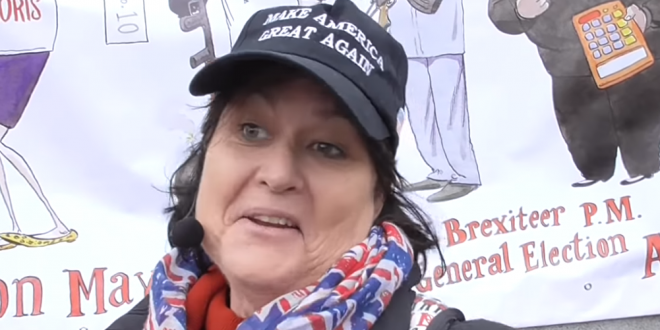 A British woman whose Twitter handle is Based Amy has filmed herself stalking up to the famed Trump Baby Blimp and slashing it with something, cutting herself in the process.

Moments later, constables arrive to slap the handcuffs on Amy, with her shouting, “Be careful, please. I’m disabled. Be careful! I’m not dangerous! Look at the police, the police are coming after me! Stop it!”

She then recites the arresting officer’s badge number and threatens to sue him if he breaks her phone. “Hey, America! Help me! These people are assaulting me!”

Based Amy has a long history of live-streaming at far-right protests and has apparently been arrested multiple times.

Turns out the Trump balloon was slashed today at London protests by Amy Dalla Mura, aka ‘Based Amy’. She was subsequently arrested. pic.twitter.com/aDV9s0bN1t