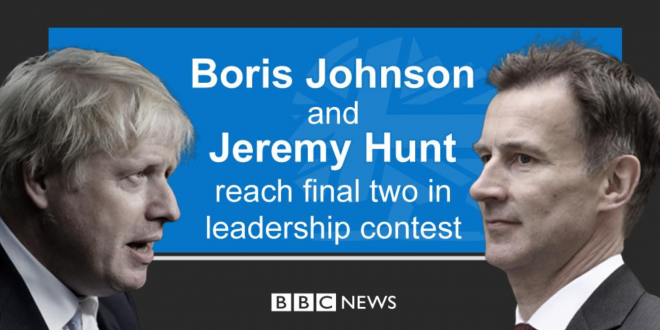 BRITAIN: Tory Battle For Prime Minster Down To Two

Jeremy Hunt will face Boris Johnson in the race to be the next Tory leader and PM, after Michael Gove was eliminated in the final ballot of the party’s MPs. Environment Secretary Mr Gove was supported by 75 MPs – just two votes short of Mr Hunt’s 77.

Mr Johnson, who was backed by 160 Conservative MPs, said he was looking forward to “getting out across the UK” and to set out his Brexit plan.

He and Mr Hunt will now be put to a vote of around 160,000 party members. The winner will be announced in the week of 22 July. All 313 Conservative MPs voted – with one spoiled ballot recorded.

Hunt last appeared on JMG when he said he “150% agrees” with Trump’s retweet of a British white supremacist.

As Prime Minister I would deliver Brexit and turbocharge our economy. Watch the highlights from last night’s debate 👇#HastobeHunt pic.twitter.com/vmKvo8y3fU

I’m the underdog – but in politics surprises happen as they did today. I do not doubt the responsibility on my shoulders – to show my party how we deliver Brexit and not an election, but also a turbo-charged economy and a country that walks tall in the world

I’m deeply honoured to have secured more than 50 per cent of the vote in the final ballot. Thank you to everyone for your support! I look forward to getting out across the UK and to set out my plan to deliver Brexit, unite our country, and create a brighter future for all of us. pic.twitter.com/i5D4ByurAM

Count me in! Really looking forward to a debate of ideas with my colleague @Jeremy_Hunt on @ITV https://t.co/F1TqYHoVKQ