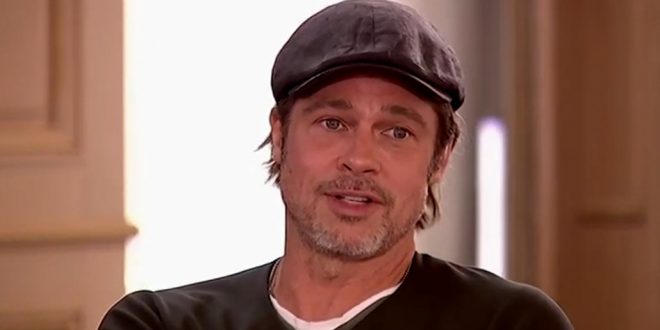 Brad Pitt is no mascot, but ESPECIALLY not for the notorious upcoming Straight Pride Parade and he’s doing what he can to put a stop to the idiocy. Currently, their website claims this community has adopted Pitt as its mascot, and congratulates him for being “the face of this important civil rights movement.”

Sources close to Brad tell TMZ his team has reached out to the Straight Pride Parade organizers, demanding they stop using his name and likeness for their event. If they don’t do it soon we’re told further action could be taken.

The parade has unsurprisingly been met with scorn and has a lot of folks shaking their damn heads, but here’s what Boston native and ‘Captain America’ star Chris Evans thinks about it.

Two days ago JMG reader Mike emailed to say he’d phoned Pitt’s management to give them the heads up, so this might be his work.

Wow! Cool initiative, fellas!! Just a thought, instead of ‘Straight Pride’ parade, how about this: The ‘desperately trying to bury our own gay thoughts by being homophobic because no one taught us how to access our emotions as children’ parade? Whatta ya think? Too on the nose?? https://t.co/gaBWtq2PaL

Previous US And Mexico Discuss Migrants Deal To Avoid Tariffs
Next UTAH: Yet Another Trump Cultist Arrested For Allegedly Threatening To Kill Democratic Members Of Congress