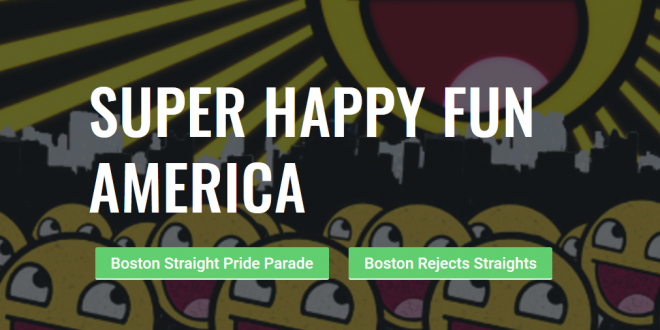 Pride Month kicks off in Boston on Tuesday with a lights event, a paint night — and preparations for a possible “Straight Pride Parade” this summer.

The event to celebrate heterosexuality in one of the nation’s most gay-friendly cities is meant to poke fun at the “identity politics” of the political left, organizer Mark Sahady wrote in a Facebook comment. The parade organizers have designed a flag and designated actor Brad Pitt as their “mascot.”

“For them everything is based upon identity and whether or not one is categorized as a victim or an oppressor,” Sahady wrote on Facebook. “If you get victim status then you are entitled to celebrate yourself and expect those with oppressor status to defer to your feelings.”

It looks like the Boston Straight Pride Parade will happen. We filed a discrimination complaint and it appears the City of Boston understands they would lose in litigation. The city is now working with us on the parade. We will have the streets closed and be allowed floats and vehicles.

The tentative date is 8/31 but will be finalized in the next few weeks. The proposed parade route is below. If you would like to come as an individual, march as a group, or bring a float or vehicle, then get in touch. This is our chance to have a patriotic parade in Boston as we celebrate straight pride.

The group’s website is here. Slogan: “It’s great to be straight.” The group says the event’s keynote speaker will be a “very famous gay conservative.” So we’re guessing that’s Milo. This whole thing might actually be his idea. The parade is trending at #1 on Twitter at this writing.

A more accurate name for the Straight Pride Parade would be Incelebration.

The straight pride parade will be mostly men because very few women will get to come.

the straight pride parade in boston should have a completely straight parade route, i thought i’d save them some time by drawing one pic.twitter.com/afbUi8mtnu

Floats for the Straight Pride Parade…

Straight pride parade is just gonna be three guys in cargo shorts in the back of an F-150 one of their bored wives is driving, the Chic-Fil-A cows, and grand marshal Eddie Money who thought he was booked for something else

ATTN: Straight People. Don’t be upset that you don’t have a pride parade … be grateful you don’t need one!

"LEGGINGS ARE NOT PANTS"

"JUDY GARLAND IS JUDGING YOU"

"CHANGE IS POSSIBLE THROUGH DISCO." https://t.co/WhPVdI7iin